California-based St. George Spirits offers this “super Bourbon” blended (in Alameda) from 80 different barrels of Kentucky Bourbon, each aged five to seven years and hauled back to Cali from the east. This “barrel thieving” has resulted in one of the few California-bottled Bourbons you’ll find, although that term is of course loaded with plenty of confusion.

Nonetheless, let’s have a taste. This whiskey is straight-up, unshocking Bourbon, without a lot of surprises.

The nose: Surprisingly mild. Oaky, with plenty of vanilla, and touches of citrus on the edges.

The body: Fruitier than I expected, with legitimate apple character, orange pulp, and sherried characteristics, all playing with a deep nougat and milk chocolate core that recalls that dessert-like vanilla character. Not overwhelming in complexity, though all the components work well together. The slightly higher proof — 86 — gives it a bit more heat than it would otherwise have (a wise idea, given its easygoing demeanor), though that ultimately can’t make up for barrel time. 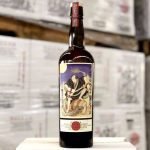