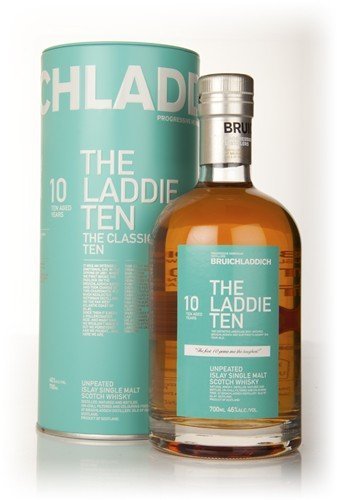 Bruichladdich calls this “without doubt the most important release in our history.” That is some heavy language, and so far the world has responded in agreement. It was recently named the single malt whisky of the year from Whisky Advocate, capping a run of high praise for the dram.

Why is this humble 10-year-old so important? Because it is the first release from the company under its current ownership based solely on spirits it distilled and put into casks. In 2001 Jim McEwan bought the then-closed distillery (and its aging stock), and fired up the stills. In late 2011 he bottled his first whisky, called it Laddie Ten, and declared it would be the company’s flagship Scotch henceforth.

That’s a lot to rest on this Laddie’s shoulders, but I’ll agree that the praise is valid. Aromas of banana and orange fill the room just from cracking open the bottle, very fresh and very sweet. Stick your nose in the glass and it’s amplified all the more.

On the palate, smooth honey, gingerbread, mild malt and grain, and citrus overtones. A touch of sea salt, as you’d expect from an Islay (albeit peat-free) whisky. Big, big body, belying the relative youth of this malt, which helps to balance some surprisingly vibrant and strong flavors. Some very light hints of smoke on the back end. The sherry-infused finish however is indicative of a younger whisky, but that’s not so much a fault as it is a simple reality of getting a $50 single malt into the bottle. Certainly a whisky that is worthy of both everyday and special occasion drinking, but affordable enough to have on hand at all times.