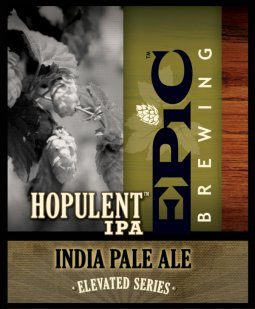 Continuing from our recent Brewery Spotlight, today we are rounding out the last few beers from Epic Brewing Company.

Epic Brewing Hopulent IPA looks every much the part of an imperial IPA, with a dark amber body, snow white head, and cloudy appearance, but despite this and the name, this isn’t your run-of-the-mill hop bomb. I wasn’t sure if this was on account of it being a relatively old bottle for an IPA (this was from Release #27, brewed on August 18, 2011) or if Epic brewed it as such, but this has a balanced aroma full of caramel sweetness. That isn’t to say that the hops don’t come through completely, but they are muted and veiled.

If the nose let on that this wasn’t a hop-forward beer, the taste certainly tries its best to fight that notion. The initial sip brings a rather strong bitterness that is only accentuated as one continues to drink. It’s times like these that I am thankful that the malts are so present, as they really help to cut that bitterness. Much like in the nose, the hops fall off shortly after the strong rush, leaving the tropical fruits in favor of a sweet, rich caramel and toffee, and this comes across prominently. In fact, at the current age of this beer, this could pass as an aggressively-hopped American barleywine. I don’t really consider myself an ‘IPA-purist,’ where if an IPA is older than a month that it is past its prime, but I can’t help but feel that this would be a lot better if fresher. Right now, the malts dominate this beer outside of the first few moments, with a sweet finish. That being said, if you like a more ‘balanced’ IPA, then this may be right up your alley. C+ / $8 per 22 oz bottle

Amber ales are sort of a grab bag in terms of what kind of qualities you can expect from them. Some, like Troegs’ Nugget Nectar, is essentially an IPA wrapped up in ruby wrapping paper, while others focus more on the malts and their sweetness. Epic Brewing Imperial Red Ale is more along the lines of the former, but exhibits a pleasant balance. The first whiff of the nose brings a slightly spicy quality mixed with a somewhat astringent alcohol smell. I lent the spiciness to the hops, but there’s also a fairly strong caramel presence here as well. As it opens up, these blend together smoother, which helps cover the alcohol.

Initial tastes are pleasant mixtures of hop and malt, with a focus on hop resin. There is a clear distinction between the spicy, and at times fruity, hops and the toffee-like sweetness of the malt, as the hops start and end the flavor with the caramel sandwiched in-between to serve as a distraction. The hops do have just a pinch of fruitiness to it, with the usual Cascade influences, but for the most part it is more earthy and spicy, which both compares and contrasts the malt in a good way. The alcohol comes in about midway through and lingers, hampering the overall taste. Overall, I would’ve liked to see some more direction. The hops and malt are in constant conflict, which keeps the mouth guessing as to where this is going, but at the same time it’s nice to have a balanced beer. The one major flaw I can find with this is the amount of alcohol presence. B / $10 per 22 oz bottle

Of all the Epic Brewery beers I’ve reviewed, Epic Brewing Spiral Jetty is probably the most ‘ordinary.’ There are no exotic ingredients or unique fermenting techniques and it is released under the Classic Series line, which Epic describes as the ‘not so basic, basic brews.’ But even with the lack of fanfare, I actually really enjoyed this beer, and at times, more so than some of the limited offerings. Despite the bare-bones approach to an Indian Pale Ale, Spiral Jetty’s aroma brings a clean hop influence which is fruity and floral, and even has some notes of resin without being overly abrasive. There’s a decent amount of malt here as well, but it’s essentially hop-forward most of the way.

The hops continue to be the focal point in the flavor, with a grassy, lemony citrus taking the stage for most of the taste. It’s overall a fairly mild flavor, with the hops giving off their fruit and floral notes without being overbearing. The malts swoop in during the finish to add a touch of sweetness. I have to admit that I really enjoyed the simple, yet flavorful view towards this beer. It’s not amazingly complex, but what it does, it does well with a no-frills type of enjoyment. B+ / $6 per 22 oz bottle

Moving away from the hoppy spectrum, Epic Brewing Imperial Stout is an exercise in roasted malts. Straight away, the nose opens to an aroma that is more reminiscent of this morning’s coffee rather than a beer, but after letting it air out, I got a lot more dark chocolate and star anise underneath the roast. There’s even a slight waft of fruit that fleetingly comes into play, reminding me of a Terry’s Chocolate Orange, but it leaves just as swiftly as it arrives.

The pitch-black body precludes that this imperial stout is brimming with flavor and it doesn’t disappoint. Roasted malt floods the palate and if you had any doubts about it, some more comes after that. It’s almost like a burnt roastiness, like over-steeped coffee grounds mixed with real pure cocoa. The licorice comes through strongly as well. The hops and fruit are nearly completely absent here, with perhaps a very slight tint in the finish. This was my favorite Epic beer to date; its Imperial Stout is an unabashedly malty beer that doesn’t mince its bitterness and roast.   A / $12 per 22 oz bottle

Although the season for pumpkin beers has come and gone, Epic Brewing Fermentation Without Representation isn’t your typical beer for the style. Epic teamed up with D.C. Brau for this collaboration, which uses a porter as a base to help give some complementing features to the pumpkin, such as chocolate and some coffee. Speaking of the pumpkin, Epic and D.C. Brau stuff over 200 pounds of the gourd into each batch as well as adding five different spices and Madagascar vanilla beans. This is a beer that is more at home on the dessert table after Thanksgiving dinner rather than celebrating the pumpkin harvest!

The aroma is interesting and awkward at once. I was hard-pressed to find much pumpkin in this as the malts and spices dominate the nose. Ginger, vanilla, and cinnamon contribute the most, and they aren’t afraid to border on overpowering. Similarly, roasted malts and a bittersweet chocolate follow the spices to help curb their effects.

In comparison to the nose, the taste actually mellows out the spices in a way, as the chocolate plays a bigger role that helps this beer overall. The spices are still integral to the overall profile, but they flutter in the background as they should. I’m not one to invoke the purity of the Rheinheitsgebot, but I wanted to actually experience some pumpkin in a pumpkin porter and this beer finally delivers on that front in the finish. That being said, I would still file the pumpkin as a tertiary thought at best, mingling among the malts and spices. B / $10 per 22 oz bottle 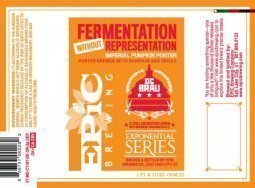