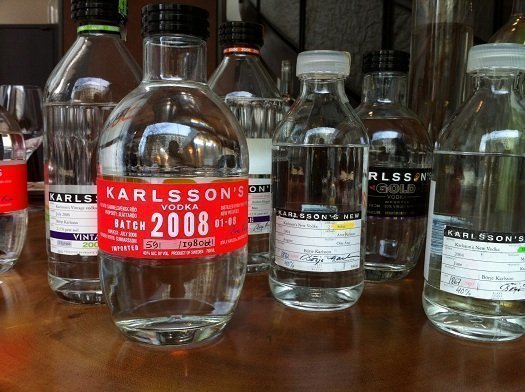 I say Celina, Solist, and Sankta Thora. What comes to mind?

If you said Nordic maritime vessels, you are unfortunately incorrect. The answer: They are all white potato varieties grown in Sweden – and used in the production of Karlsson’s Gold vodka.

I reviewed Karlsson’s Gold early in my Drinkhacking career, and found it a bit overwhelming to what was, at the time, a relatively novice palate. Recently I sat down with the vodka’s brand manager, Mia Ekelund, daughter of founder Peter Ekelund, to discuss the young brand and its new release: A single vintage, single-potato varietal, very limited release of its vodka.

Founded just a few years ago by Ekelund and master blender Borje Karlsson, both founding members of the Absolut Vodka team, Karlsson’s Gold is an extremely unique vodka in a field of relatively sweet, flavorless spirits: Distilled just from a blend of seven potatoes a single time in a column still and bottled unfiltered, it leaves behind an awful lot of flavor that other vodkas would have washed away.

At this tasting I had the chance to delve into the past with Ms. Ekelund, considering four single vintage, single potato spirits the company created in years past, leading up to the 2008 single vintage that is being released.

We started with a 2004 vodka made from Solist potatoes, comparing it with a 2006 Solist vodka and a 2004 vodka made from Minerva potatoes. Shockingly, these vodkas were amazingly different. The Solist 2004 earthy and dark in flavor, the Solist 2006 (a rainy year) sharp and lightly sweet, and the Minerva 2004 somewhere between the two. This led to another vodka made from Gammel Svensk Rod potatoes in 2006. This slightly red-skinned potato was a clear favorite, hugely earthy, lightly sweet, and possessing a lovely, rich body that the other varieties were lacking.

It was easy to see why Karlsson’s chose this variety for its 2008 Gammel Svensk Rod vodka, which is being formally released in April in New York and California. Just 1980 bottles are being made available, and if you’re a vodka fan you need to track one down: This was a vast improvement over the 2006 version, full of mushroom and roasted greens character, but balanced with honey and nougat on the finish. Great balance altogether, it’s one of the richest vodkas I’ve experienced in recent years. A / $80

Compared to the original Karlsson’s Gold – a blend of Solist, Marine, Princess, Hamlet, Celine, Sankta Thora, and Gammel Svensk Rod potatoes – I was still impressed. Similarities abounded, but the standard release has less nuance, with more of a nutty character and some citrus – both lemon and orange – on the tongue. Today, I’m finding this quite an enjoyable vodka, beefy but loaded with drinkable elements. Updated rating: A- / $40