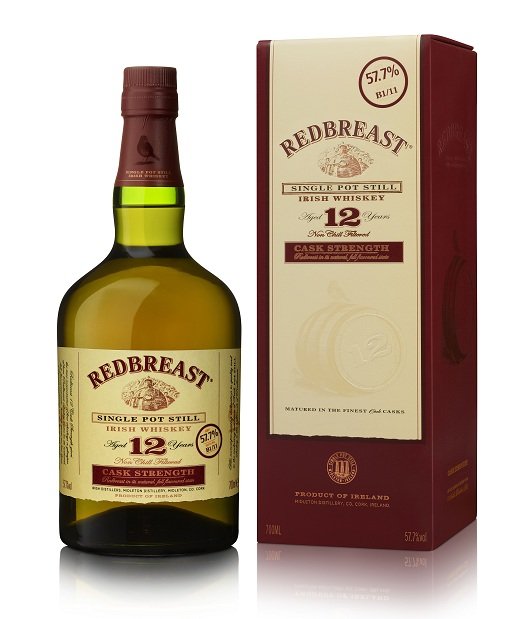 My oh my how the people love Redbreast. It wins awards, has hipster cred, and bartenders love the stuff. It’s the hippest Irish whiskey on earth, and it costs a boatload.

Made by Midleton (which also makes Jameson and other Irish brands), it is distilled three times in a copper pot still before aging. Now the venerable 12 year old Redbreast is newly available in a cask strength version, bumping the proof up to 115.4.

Most people drink Irish because it is so easygoing, and Redbreast shows why the Other Half may be getting into it: It is not so easy, bolder, fuller, more flavorful, and a little rough around the edges, perhaps primarily due to the use of both malted and unmalted barley in the mashbill. There is plenty to like here: That telltale Irish whiskey banana character (almost over-ripe in the way it comes across), coconut, nougat, dried figs, raisins, and butterscotch syrup. It’s creamy and rich, almost like a dessert or an ice cream topping. But it keeps that quirky funkiness — a kind of bitter edge that you really only catch on the finish.

Of course, at cask strength it is a different experience than at 80 proof. But even I was embarrassed at how easy it goes down without cutting it with water. The side effect of high-proof whiskey is always that crazy long finish, though (I wouldn’t call it “burn” here), something you can only cut with… another sip.

Now that I’ve spent more time with Redbreast, I’m starting to see what the others do. I can’t speak for the 80-proof varieties (yet), but this could be the start of a beautiful friendship.