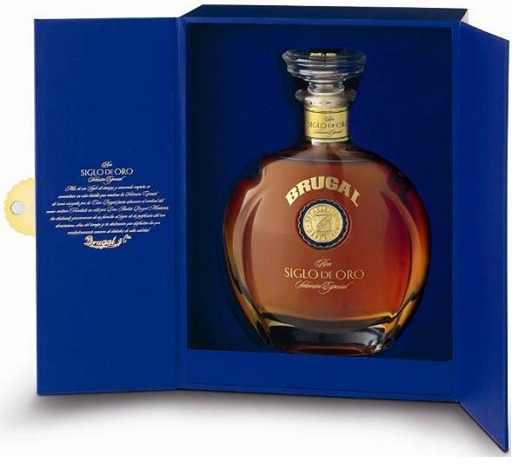 It isn’t every day that we’re treated to products that aren’t even sold in the U.S., but our good friends at Brugal sent this, Brugal‘s Siglo de Oro (“Golden Century”), for our consideration. It’s Brugal’s most prized rum, so rare it  is produced only once a year and doesn’t even appear on Brugal’s website.

Fortunately, the company translated the all-Spanish information on the label and packaging to give me some details about this uncommon breed, recently repackaged from opaque blue bottles into clear decanters.

Originated in 1988, this rum is double distilled, then aged for up to 8 years in medium-toasted American oak barrels, then placed into new oak barrels for another 8 years, making this pretty ancient for a modern rum.

You can tell before pouring it: For a 16-year-old Dominican rum this is surprisingly light and clear, color-wise. Compared to other old rums, like the mahogany Zacapa 23, it’s practically the color of iced tea.

On the nose: Light as a feather, shocking, really. Some green herbs, wood, and traditionally sweet rum notes. Take a sip and you see how subtle this rum is. There’s none of the intense chocolate and cinnamon notes of, say, Zacapa, which I poured side by side for instructional purposes. Rather, it’s pure molten caramel, coffee, brewed tea, and a lightly bitter edge, like a green coffee bean. This is pure Brugal house style, just with more of an agricole-style funk. There’s petrol on the finish, surprising for something this old, but I have to chalk it up to all that time in wood.