Pali operates in Lompoc but bottles single vineyard wines — primary Pinot — from all over the west coast. Recently it launched a cuvee program to bring more affordable, region-specific wines to the masses in higher volumes than it can do with its single vineyard wines. We tasted three of the newly released 2010 bottlings. Notes follow.

2010 Pali Chardonnay Charm Acres Sonoma Coast – Surprisingly restrained for California Chardonnay. Lemon and grapefruit on the nose, buttery and rich body, but minimal oak influence and a really light finish that fades fast. Easy drinking and, while not exactly complicated, refreshing for Chardonnay. A- / $20

2010 Pali Pinot Noir Huntington Santa Barbara County – Very jammy for Pinot, particularly for a wine from the typically denser Santa Barbara region. Big strawberry and raspberry character, with minimal tannin. So much fruit you’d think you’re drinking grape juice. I don’t mean that in a bad way. I rated the 2009 vintage the same. B+ / $21

2010 Pali Pinot Noir Riviera Sonoma Coast – Even jammier, almost cloying. Massive strawberry character here, strawberry syrup and candy-like, with a touch of chocolate on the back end. Too sweet for my tastes. B- / $19 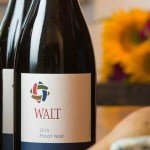 Tasting Report: Wines of the Santa Rita Hills 2011
Posted in Rated A-, Rated B-, Rated B+, Reviews, Wine