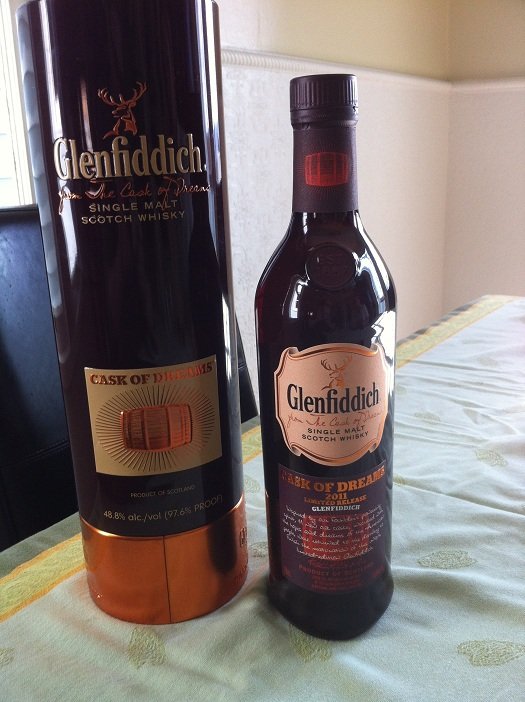 The story behind the creation of Cask of Dreams is beyond anything else I’ve ever heard of in the five years I’ve been writing this blog.

If you don’t know the tale, draw near, and listen to the story of how you make a truly unique whisky.

Cask of Dreams starts with off-the-rick Glenfiddich, with Malt Master Brian Kinsman picking 14- to 16-year-old casks of the lightest style of whisky he could find.

Meanwhile, Glenfiddich ambassadors took 11 new, unused oak casks and took them to the streets of 11 U.S. cities. No, literally. They rolled them around, had locals sign them, then had a party to celebrate all things ‘Fiddich.

The 11 casks were then sent back to the Highlands of Scotland, and the whisky from those aforementioned casks was put into these new oak casks for finishing. New oak will age a spirit mighty fast, so it was watched carefully, bottling after three months in those “Casks of Dreams” at 97.6 proof. The whisky from those 11 casks was mingled in the final vatting: There’s only one 2011 Cask of Dreams, not 11 of them.

This is a unique and intriguing whisky. I can’t think of any other release that used new oak at any point in the creation. Notably, there is no ex-sherry wood in this blend, increasingly common for single malt whisky.

It’s really a lovely, and dangerously drinkable malt. Despite a respectable age and despite the new oak influence, it is remarkably light in body, lush with character. Vanilla pops out first on the nose, and that carries over to the body. Here you’ll also find big apple fruit — almost applesauce, with cinnamon notes, especially once you add water — plus lots of exotic cedar box and incense lacing. The finish turns to figs, golden raisins, and some cooked stone fruit flavors. But none of this is overcooked the way some old whiskys can be. There’s no real raw wood influence here, just that smooth vanilla that I chalk mainly up to the years it spends in ex-Bourbon barrels.

Cask of Dreams will be back in 2012, this time with an art-focused bent on the barrels and a more international vibe perhaps. Meanwhile, this bottling is already hard to find. Snap it up if you can.