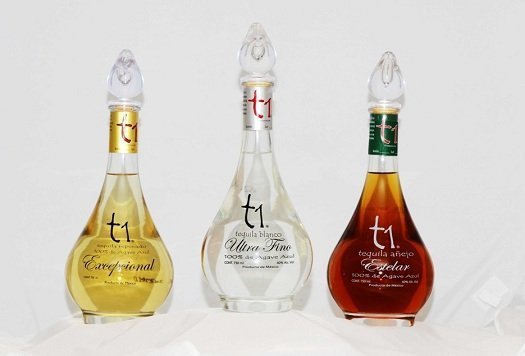 t1, aka Tequila Uno, is a new brand of Highlands-grown, 100% blue agave tequila brought to us by the master distiller of the well-regarded Chinaco Tequila line, German Gonzalez. Gonzalez’s twist on the spirit? For some of his varieties, instead of aging in Bourbon casks for his reposado and anejo, he uses ex-Scotch barrels (which were probably Bourbon barrels before that, of course). I don’t know that I’ve never heard of such a thing — but I was instantly intrigued.

The company dropped off all three varieties — including the just-launched anejo — for us to sample. All are 80 proof. Thought follow.

t1 Tequila Blanco Ultra-Fino – Straight, unaged white tequila. This exhibits the classic sweet and fruity character common to Highland tequilas, amazingly bright with pear and apple notes, a bit of lemon, and a little cinnamon on the finish — almost apple pie-like. The agave is heavy on the nose, at least initially. With air, this fades pretty quickly, leaving behind these wonderful fruit flavors and a soothing, mint-like agave lacing. Beautiful, one of the most subtle blancos I’ve experienced in a long while. A / $40 [BUY IT NOW FROM DRIZLY]

t1 Tequila Reposado Excepcional – t1 makes a standard reposado (we didn’t try it); this is the one aged in Scotch casks, where it spends 6 to 9 months soaking up goodness from that island up north. This is a really intriguing spirit. For starters, it’s quite sweet, much more so than I expected, but who knows what Scotch barrels are used here? Really bright citrus flavors here, lots of pineapple notes. It’s tough to pick out malt whisky character on this one, that sugariness is overwhelming. It even drowns out the agave notes for the most part, leaving behind something that approaches — as near as I can describe it — a lightly aged rum. As tequila goes, this is, put simply, something else. Frighteningly easy-drinking. B+ / $50

t1 Tequila Anejo Estelar – Intense coffee and burnt sugar dominates this anejo, which spends up to 24 months in Scotch barrels. I lively bronze in color, the body recalls the sweetness of the Excepcional, but is tempered with more candy bar notes, dark chocolate (again), plus coconut, almonds, and a cappuccino finish. Again, intensely drinkable, but not entirely challenging. A- / $55