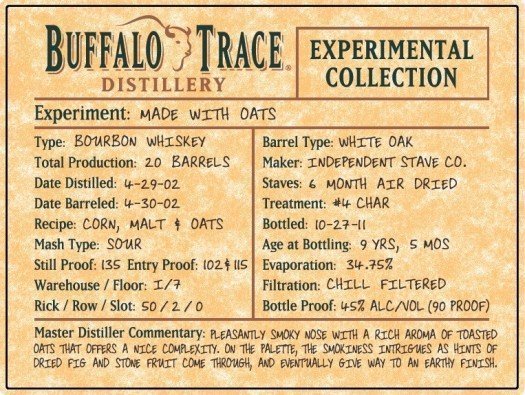 God bless Buffalo Trace. Some of the most interesting and intriguing whiskeys in the world are coming out of this massive outfit, many of which are branded, appropriately, with “Experimental Collection” on the label.

These two oddball whiskeys are BT’s last Experimental Bourbons from 2011, and they arrived at Drinkhacker HQ with quite a bit of baggage, considering my colleague John Hansell wrote about them last month with the headline, “Don’t buy this whiskey!” Including the exclamation point.

Both of these whiskeys are 9 years old, aged alongside each other in a high floor, created using traditional recipes and techniques — with one twist. While the primary starch in the mashbill of both is corn, and both feature barley as well, instead of rye or wheat they both turn instead to an odd additional grain as a kicker: respectively, oats or — wow — rice.

Both are 90 proof. Here’s how they stack up.

Buffalo Trace Oat Bourbon Whiskey is a burly, amber monster. The nose is enticing, all toffee and caramel, wood and charcoal. Sipping reveals something a bit different. Foremost: Alcoholic burn, the kind of heat you get from a really young Bourbon. Hansell is right about that: This has a hard edge to it that’s impossible to push past, and while I hesitate to point the finger at the oats (I’ve found High West’s oat-based white whiskey quite the delight), there is something a bit too tough in this. Balance? Not here. There are hefty green vegetables in the body, so much so that I think my mother must be proud that I’m drinking this. That finish is long, lasting, and a bit on the foreboding side. Peppery, full of coconut husks and burnt toast. And yet… it’s not entirely unpleasant, in the way that Islay whisky or really old Pappy Van Winkle can be. I can see all the nuts that suck down George T. Stagg gulping this stuff down by the gallon… if gallons of it existed. B

Buffalo Trace Rice Bourbon Whiskey is lighter on the nose, and more easygoing than the Oat Whisky. At the same time, it shares some DNA in that heavy burn of a finish, one which is redolent of, bluntly, too much time in wood. The body proper is one of orange marmalade, hot coals, a bit of vanilla, and grain husks. There’s certainly nothing “rice like” in the mix, but, as with the Oat rendition, it’s a whiskey that merely cries out for something. B 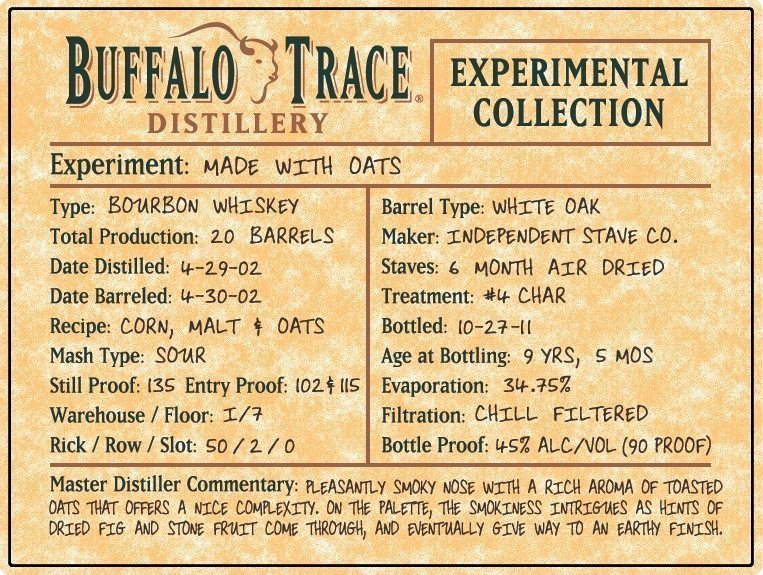