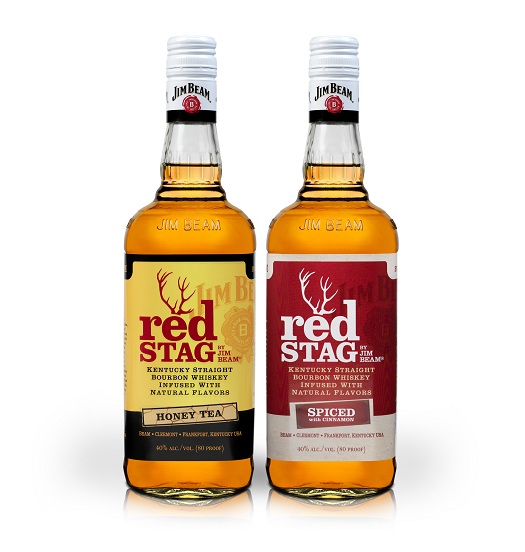 Red Stag — black cherry flavored Bourbon whiskey — was a bit pioneering on its own. And while it isn’t the only flavored whiskey we’ve encountered, now try this on: Two new versions of Red Stag (which is still based on a standard, four-year-old Bourbon), one with honey and tea flavors, one with cinnamon. We got an early taste of both of the new varieties. Here’s what we thought.

UPDATE: John, in the comments below, is correct. “Red Stag” is a new brand name, not an indicator of black cherry. So, no, there shouldn’t be black cherry notes in these. My bad.

Jim Beam Red Stag Honey Tea shouldn’t really surprise anyone — honey and tea are the two biggest flavors in the whiskey world right now. Now putting them together and adding them to whiskey that’s already black cherry flavored isn’t something I would have thought of. Sure enough, this is a convoluted spirit with a lot going on. The honey comes through the strongest, surprising me, and beating back the tea character handily. It’s a whole lot to deal with, but not entirely unpleasant. Basically, you should consider this to be Beam’s entry into the honey-flavored Bourbon category (everyone else in Kentucky has one) and less an expansion of the Red Stag line. B+ [BUY IT NOW FROM DRIZLY]

Jim Beam Red Stag Spiced with Cinnamon – Again, fairly self-explanatory? The cinnamon notes are strongest here, offering a light, Hot Tamales character to this spirit, punching aside just about everything else. There are some fruit notes in the nose, oddly enough, which is where the cinnamon barely comes through at all. Again, think of this one as cinnamon first, whiskey second. Not at all bad. B+ [BUY IT NOW FROM DRIZLY]

Both are 80 proof and arrive on shelves early this year.