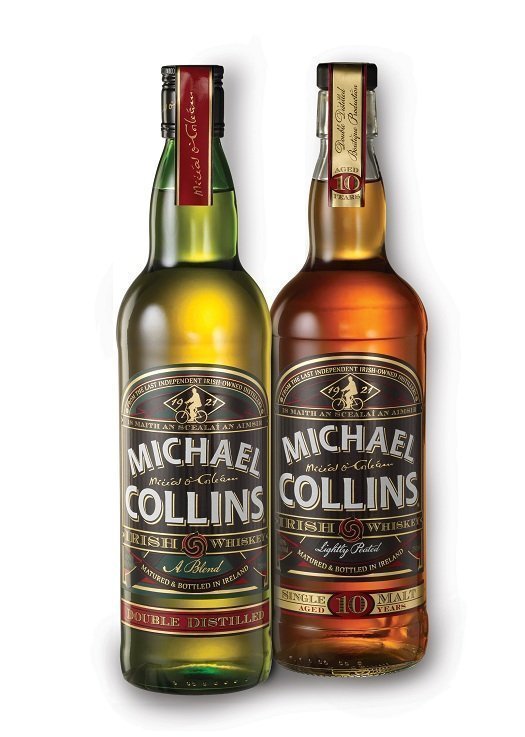 Irish whiskey brand Michael Collins has been on a tear this year — taking advantage of the recent upsurge in popularity of Irish whiskey, no doubt — rebranding, repackaging its spirits (the old bottles were monstrosities), and replacing its old Single Malt whiskey with a new, age-statemented, Single Malt 10 Year Old whiskey.

We re-sampled the original Blend and tasted the new 10 Year Old, too. Both are 80 proof.

Michael Collins “Double Distilled” Blended Irish Whiskey (2011) – In theory this is the same whiskey as the prior Blend, but putting the two side by side, there really do appear to be some minor differences — and improvements — here. The color is more amber, less green, and the body seems somewhat more present and full, absent the somewhat vegetal notes (or hay, perhaps) of the version we reviewed in 2008. There’s more sweetness, and more malt, better balance on the whole. The most welcome change is that although the proof levels are the same, there’s less pungent alcohol overall, a problem that really marred the older version. I don’t know if the recipe has changed significantly, but all spirits do change and evolve over time due to the vagaries of production and the mysteries that come along with the aging process (and it’s something to keep in mind when you read older reviews of just about anything). In this case, evolution is a good thing. B+ / $30

Michael Collins Single Malt 10 Years Old Irish Whiskey (2011) – Darker in color, a bright orange almost, lots of alcohol on the nose. I sampled this at a recent whisky event and was immediately unimpressed. A formal tasting didn’t change that opinion much: This malt is just unfascinating, with an initial rush of booziness, and a big punch of wood soon after. (Perhaps the quest for an impressive age statement resulted in too much time in oak?) This moves into a kind of cloudy smokiness, with a whopper of a finish that reminds one of deeply charred wood, moss, and intense vegetation. Most of all, this is not in balance. The finish hot, bothersome, and not very inviting. The good news is that returning to the Blend for a sip afterward helps to even this whiskey out. C / $38