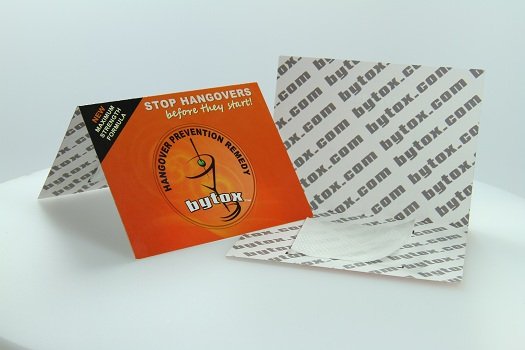 Say what you will, but I am an unabashed fan of the Zaca Hangover Patch. Every time I’ve worn one, I’ve woken up the next day refreshed and feeling fine.

Now there’s another hangover-slaying patch on the market: Bytox. How would it measure up?

The idea is exactly the same: Put the patch on before drinking (not after!), and leave it on overnight. It sends vitamins and such through your body while you sleep. The makeup of Bytox is quite different than Zaca, which is heavy on Lycopene, Prickly Pear, and other such stuff. The Bytox patch contains Vitamins A, B12, B2, B3, B6, Pantothenic Acid, Folic Acid, D, E, K, and Thiamine (the lack of the lattermost being what Bytox ultimately blames hangovers on). Acai berry is the only new-age addition to the vitamin mix. The patch itself is also different, larger and feeling more like plastic than the cotton mesh Zaca. And while I love the idea of not having to swallow anything to get vitamins and such into the system, I found Bytox left a residue on my skin after I removed it.

While mileage will always vary with these things, ultimately Bytox didn’t seem to work as well for me as Zaca. While wearing it I slept restlessly, had bizarre dreams when I was out, and woke up with a mild headache. Bytox (like any hangover remedy) obviously can’t erase the effects of drinking, but it didn’t seem to do enough compared to other stuff on the market — though it is substantially cheaper. Willing to try it again, though.

Review: Hangover Gone (aka Hang On)
Posted in Hangover, Rated B-, Reviews