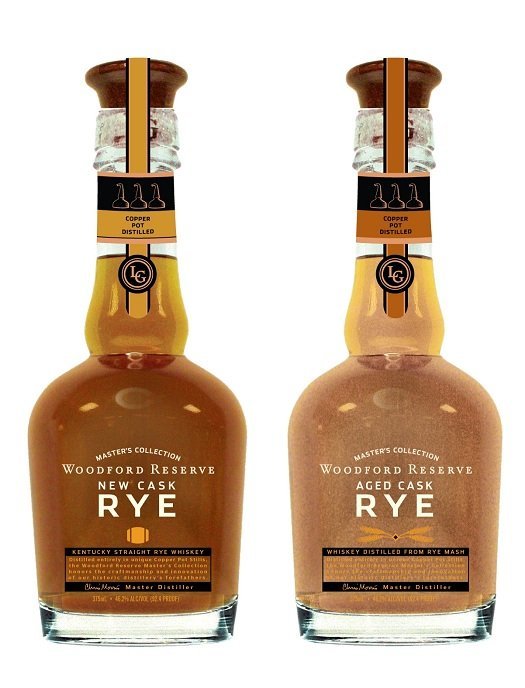 Every year Woodford Reserve releases a limited-release Bourbon, usually with a special finish or mashbill. This year it’s not releasing a Bourbon. It’s releasing a rye. Or rather, two of them. I caught a sneak peek of this being prepared for bottling when I visited Woodford this summer. Now here it is, on my kitchen table.

The 2011 Master’s Collection from Woodford is called Rare Rye, and it comes in two formats: New Cask and Aged Cask. The former is aged in a new, unused cask (like all Bourbon is), the latter is aged in an ex-Bourbon barrel (time in cask is not disclosed). Otherwise the spirits that go into these bottles is made the same. Both are 100% rye and bottling proof is identical at 92.4 proof. The bottles are sold together: $100 gets you 375ml of each.

Woodford Reserve Master’s Collection New Cask Rye is a deep, dark amber in color. The nose offers strong and spicy hints of what’s to come: Punchy, authentic rye character, and surprisingly easy-drinking despite the proof. This is one of the more easygoing rye whiskeys out there; I’d put it in line with Bulleit’s Rye, which should be taken as a compliment. Considering how wood-forward Woodford’s Bourbon tends to be, this whiskey is a surprising, and quite delicious, change of pace. A- [BUY IT NOW FROM DRIZLY]

Woodford Reserve Master’s Collection Aged Cask Rye couldn’t look more different in the glass: Pale yellow, like a very young Scotch. If nothing else these two bottles are amazingly instructive in the power of old vs. new wood on aged whiskey. As expected, the nose is more reserved, but similar. The body is quite dissimilar: That rye grain comes on strong on the front of the palate, but caramel and vanilla notes punch their way in within seconds. While the New Cask version is ready to go, this Aged Cask Rye would easily benefit from a few more years in cask, to meld all the flavors going on here. It’s still quite good, but I find myself, when putting these side by side, returning mostly to the comparatively more intense New Cask version. B+