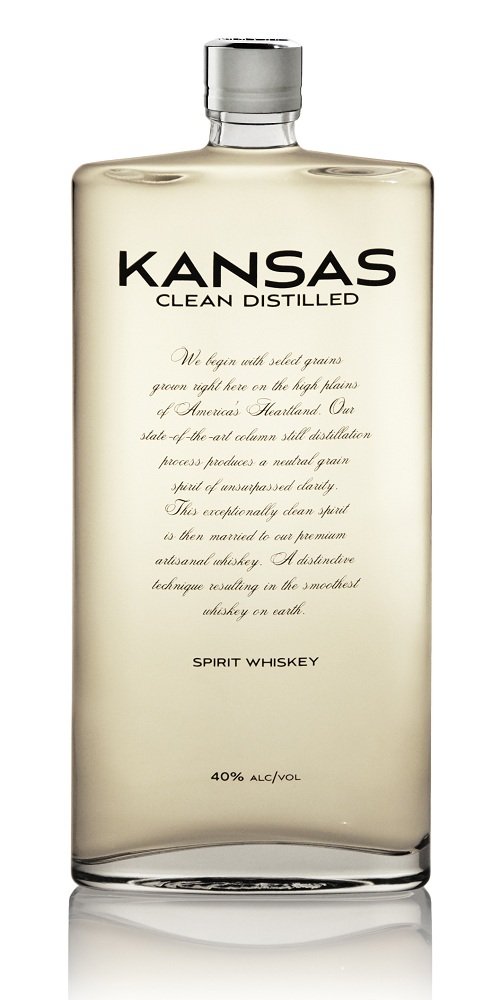 You’re not in Kansas any more, Dorothy. Oh, wait, you are in Kansas, drinking Kansas whiskey.

Fittingly called Kansas Clean Distilled Spirit Whiskey, this new brand from the newly-formed Fabulous American Beverages company (no, that’s the company’s name), is unconventional in just about every way. For starters, it’s from Kansas, not Kentucky, and it’s distilled in a column still, entirely from winter wheat, not corn. That alone isn’t that eyebrow-raising. Column stills are used everywhere in Kentucky, and 100% wheat whiskeys, while rare, exist. So far, so good.

But the inspiration for Kansas, per the company, is vodka, and the final product is meant to appeal to a younger club crowd instead of, well — as the advertising puts it — old dudes. After this distillation, this spirit is mixed with other (presumably aged) whiskey, and the final product — which does not appear to be aged further — is bottled.

Kansas has a very pale yellow color that looks more like a lightly aged tequila than a whiskey. The nose and body are something else altogether. Take a whiff and you get not wood and smoke but candy. Marshmallows and cotton candy, extremely sweet. And I hardly ever use italics. It literally pours out of the glass as you smell it, it’s that strong. Long finish, and not unpleasant, just bracing in its sweetness. Calling it “smooth” is a serious understatement.

Kansas may connote the heartland, but the whiskey comes across more like a flavored vodka. In fact, that may technically be what it is. After all, many a vodka is distilled from wheat in a column still. If it isn’t aged directly, is it whiskey? Even if some whiskey goes into it?

I’m a bit baffled as to what exactly to make of Kansas. As “whiskey” it’s a disaster, completely without any of the character that makes real whiskey so distinctive. Maybe I’m the “old guy” now, after all.

But as a vodka alternative it’s actually pretty intriguing, with lots of character that you don’t usually get in the vodkaverse. Whiskey-flavored vodka? That’s not far from the mark. I’m not sure that’s a good thing for the spirits world, but what can you do? Now it’s here.

I also have little idea what to do by way of a rating. Here’s my best attempt.

Thank you for taking the time to review Kansas. Your palate doesn’t quite agree with the people who love our whiskey. That’s okay with us. However your readers may wish get a few facts straight so that they might have a better understanding of what Kansas Whiskey is all about.

You write that Kansas may be technically, a vodka.  I hope you were not attempting here to disparage our brand and that you were just misinformed in your assertion. Actually technically, Kansas is, and can only be a whiskey as defined by the US TTB, the US government body that establishes strict guidelines as to what a spirit, of any category may claim to be.  Spirit whiskey is one of a number of categories of whiskey, like bourbon whiskey, scotch whiskey, straight whiskey, Irish whiskey etc. Many whiskies contain various blends of neutral spirit. Other whiskies distill some percentages of one grain mash at a higher level to supply the alcohol content and leave their other grains at a lower alcohol content to define flavor. Despite the various methods of distillation we’re all still whiskies.

You suggest that you’re “..a bit baffled of what to make of Kansas. As a whiskey it’s a disaster.” We’ll take “baffled” as a compliment actually. We’re new, we’re a category of whiskey that is entirely unchartered and we deliver an experience–to some like yourself, that is curious.

But to suggest its a disaster is just a weird thing to say.  Disaster as what? A bourbon? A Rye? Scotch? Surely you’d never compare a single malt to the ryes you love. Or an Irish to a port finished bourbon. I’m curious as to the context in which you’re comparing our whiskey. If you’ve not had another Spirit Whiskey against which to compare Kansas then you’re not in a position to make such a claim. Such a description without context appears careless and vaguely spiteful for some reason.

Your readers might wish to also know that while you perceive Kansas as being sweeter than other whiskies, Kansas actually has a Brix degree, (sugar content) less than many whiskies we tested. By removing nearly all the congeners inherent in most whiskies–resulting in the smoothness you recognized,  Kansas is left without the harshness found in other whiskies. Your palate may possibly perceive that lack of intervening harshness as being “Sweeter”.

Finally and on a personal note, I believe you were in receipt of our marketing materials. Indeed our marketing makes fun of the stodginess of the entire category of other whiskies. It should. Apart from a recent surge in Irish whiskey, (the result of a considerable spend), Whiskey is flat in sales and has been for 40 years. This has nothing to do with the delicious varieties of available whiskies and everything to do with their marketing people tripping behind their brands.  Its not the liquid’s fault that we see whiskey associated with old things, old labels old style bottles –which keeps the audience for whiskey firmly planted in middle aged men.

But none of the observations we make, which make fun of competitor’s advertising and marketing of whiskey have anything to do with reviewers like yourself. That’s nuts. If you love whiskey, it doesn’t mean your old. It just means you’re in love.

Our goal is spread that love just a little bit more.

Thanks again for your time, we just want to make sure everyone gets the facts straight.