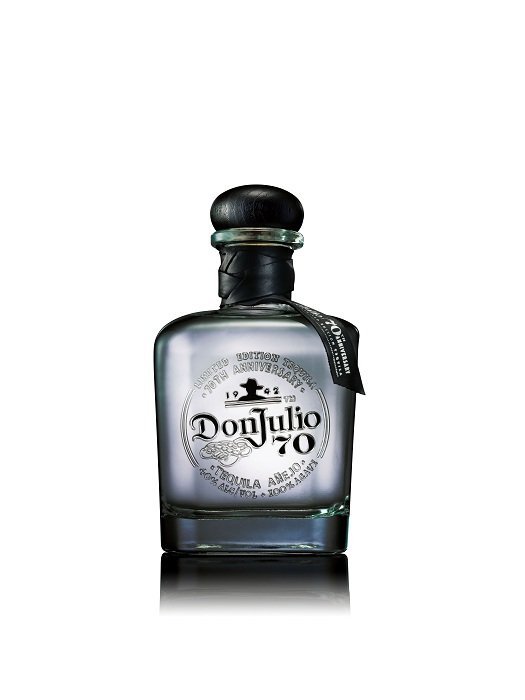 Take an anejo tequila and filter out the color, and what do you have? Don Julio 70, a new — clear — tequila with the character of an anejo.

Don Julio claims that 70 is the world’s first anejo claro, and depending on how you look at it, that’s true: Maestro Dobel does the exact same thing, but it is a blend of reposado, anejo, and extra anejo tequilas, filtered back to white. Technically it would only be considered a reposado if bottled unfiltered. But really this is an old trick that the rum industry mastered long ago. That it is now coming to the tequila world is only a mild surprise.

And so back to Don Julio 70. Composed of 18-month-old anejo tequila, filtered back to silver, I tried it side by side with both Don Julio Blanco (tasting tough and a bit green) and Don Julio Anejo (rich, caramel, cocoa-finished, quite lovely). Don Julio 70 is, surprisingly, a whole different beast. I was expecting something close to the Anejo, but that’s not the case. The nose is distinctly redolent of bananas and light wood, a weird combination of flavors that are not harmonious in the nostrils. The palate is another thing altogether. Here a butterscotch sweetness takes hold, attempted to wrestle with the wood. It fails, and the wood overwhelms everything. It’s quite jarring compared to the smooth richness of the (unaltered) Anejo, yet none of the brash agave notes that the Blanco provides.

I tried it against Dobel just for kicks, and the spirits could not be more different. Dobel adhere’s closely to its agave roots, while punching things up with a bit of sweetness yet keeping it all in balance. DJ70 is like walking into a Pier One store, full of potpourri and more wicker baskets than you can count.