Berry Bros., a UK wine and spirits merchant, is branching out into rum production, bringing in a variety of rums from all over the Caribbean and Latin America. We received one of the seven bottlings the company is importing, a 10 year old rum from Panama.

On first blush, it’s very hot — all heady alcoholic vapors — but give it a few minutes to settle down, and this Panama gem shows its charms. Rich, caramelized sugars play with light citrus notes, coconut, and a cocoa finish. After that heat burns off, Berrys’ Panama proves to be quite the smooth and, it must be said, quite delicious sipping rum. 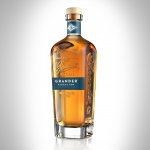