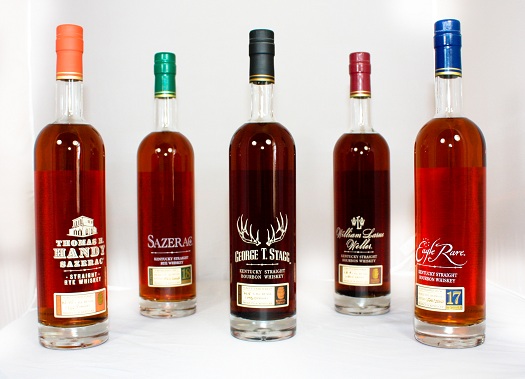 We’ve been writing about Buffalo Trace’s awe-inspiring Antique Collection for longer than I can remember, and each year it seems like these five Bourbons are better than the last time out. This year that streak seems to be taking a breather, with a mixed bag of very good and merely “OK” whiskeys.

I’d still drink any of these in a pinch but, hey, every year can’t be a masterpiece!

Sazerac Rye 18 Years Old 2011 – If you like rye you’re going to love this rendition. Massively intense on the nose, it screams on the palate with heavy middle Eastern spices, toffee, and lacy smokiness. Could use a touch more sweetness to lighten up the finish, but on the whole it’s yet another winner from Sazerac. 90 proof. A- [BUY IT NOW FROM DRIZLY] [BUY IT NOW FROM FROOTBAT]

Eagle Rare Bourbon 17 Years Old 2011 – Actually 18 years, 7 months old. Not much of a nose here, and for a 17-year-old whiskey the palate is on the mild side. If I didn’t know better I’d swear this was a younger spirit, and while the flavor — caramel, vanilla, a touch of chocolate — is there, it lacks the austerity that this whiskey usually brings to the table. 90 proof. B+ [BUY IT NOW FROM DRIZLY]

George T. Stagg Bourbon 2011 – Nobody doesn’t like George Stagg, and this burly monster is again ultra-hot — 142.6 proof — and redolent of deeply charred wood and coffee beans. Bruising and tough, it unfortunately lacks the nuance that prior years of Stagg have brought to the table. The 2011 edition I’m frankly finding tough to crack. The soothing finishing sweetness that usually comes with a solid Stagg release just doesn’t happen here. This makes Drinkhacker sad. 18 years old. B [BUY IT NOW FROM CASKERS] [BUY IT NOW FROM DRIZLY]

William Larue Weller Bourbon 2011 – Smells innocuous, but as with many a Weller of yore, the palate of this wheated Bourbon burns with intense cinnamon notes — almost like red hots candy. Again the finish doesn’t gel the way I’d like, more bitter than bittersweet, and incompletely satisfying. Weller’s never been my favorite of this collection. 133.5 proof, 13 years old. B [BUY IT NOW FROM CASKERS] [BUY IT NOW FROM DRIZLY] [BUY IT NOW FROM FROOTBAT]

Thomas H. Handy Sazerac Rye 2011 – Curious: The palate is immediately redolent of not grain or wood notes but licorice, making this an oddball installment in the lineup. Fortunately you’ll also find lots of sweet caramel and spicy rye notes here, giving it a lot of flavor. With plenty of heft at 128.8 proof, it doesn’t pull punches, but it’s perhaps a bit too young to really compete with the big boys. (That said, this year perhaps Handy’s youth — 6 years old — is its greatest asset.) B+ [BUY IT NOW FROM DRIZLY] [BUY IT NOW FROM FROOTBAT]