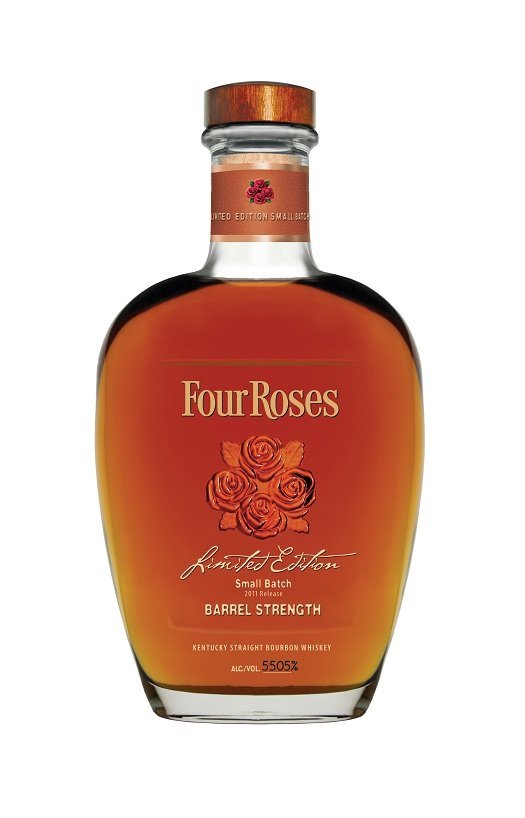 This year, the “small” batch gets bigger than ever: Four Roses is batching four of its 10 Bourbon recipes into the 2011 Limited Edition Small Batch release.

This year, the annual Limited Edition Small Batch is built out of 13-year OBSK, 13-year OESQ, 12-year OESV, and 11-year OESK. (If none of that means anything to you, read this.) That’s a pretty corn-heavy blend this year (the E is Four Roses’ less rye-centric mashbill, comprising three of the four Bourbons here), and it shows in the finished product.

The nose is hot and fiery: Add water to bring out more of the 2011’s nuance. There you’ll find a distinct cherry character on the nose along with cocoa notes. On the tongue, this cherry aroma comes across more like a cherry wood, with more of a lumberyard character to it. Compared to the 2010 Limited Edition Small Batch and 2009 Mariage (the precursor to Limited Edition Small Batch, renamed because people couldn’t pronounce it, by the way), this is a spicier, more savory batching. The chocolate cherry is distinct and lasting, with a bitter edge that lends a lightly tannic tone to the whiskey.

I’m not sure this is the best expression of Four Roses — perhaps it is overreaching in complexity and coming up just a bit short. Ultimately I think both the 2009 and 2010, and the “non-limited” Small Batch offering, are better expressions.

UPDATE: Trying this again in August 2012, I’m finding this whiskey to be mellowed out a bit, with less of that tannic edge (and more enjoyability).