Sam Adams is back again with its seasonal release of Utopias, the Guinness recordholder for the strongest commercially available beer. At 27% alcohol, Utopias continues to shock eyeballs and palates, not just with the wild, bold flavor, but with the price tag, too.

I missed the 2009 Utopias, so it’s been a lengthy four years since I last encountered the stuff. As unreliable as memory can be, nothing much seems to have changed: This continues to be a monstrous, malty, highly extracted liquid that has as much to do with beer as sake has to do with wine. Cocoa on the nose reveals a Port- or sherry-like body, with a thick, syrupy character and a punchy, Madeira-like finish. (All of the aforementioned wine casks are used in the making of this beer, by the way.)

Including ingredients that have been aged for up to 18 years, Utopias is a somewhat oxidized bruiser that will remind the drinker of old wine. Uncarbonated, it is served at room temperature and is designed to be sipped… slowly.

I took Utopias to a party filled with liquor nerds, and the most common response was “Interesting… different.” The bottle alone inspires myriad discussions. I’ve yet to meet anyone who’s fallen in love with Utopias, but everyone, like me, feels rewarded by the experience. If that sounds like a copout, that’s because it is. Four years on, I still don’t really know what to make of Utopias. But I know we occupy a richer world because it exists. 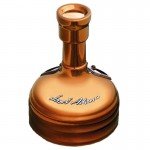