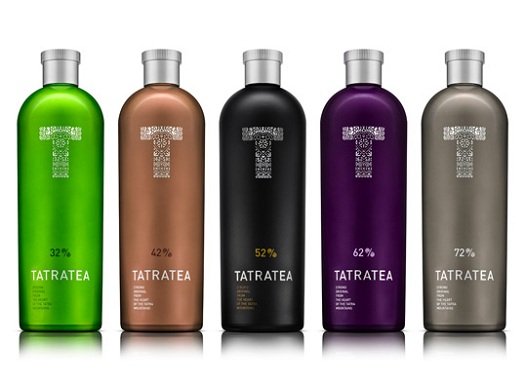 Today we have the very good fortune to cover a new liqueur series from Karloff Tatra Distillery in Slovakia, all based on tea.

Not sweet tea, so common in today’s flavored vodka universe, but hot, fermented tea: Brewed, black tea, spiced with herbs, and mixed with alcohol.  Cane sugar is used for sweetening. Then Tatratea goes one step further, releasing the liqueur in five different versions: Each designed for a different audience and with its own spin on the standard recipe — which the company claims includes 200 different ingredients — and bottled at a different proof. The numbers on the bottle tell you how deep you’re going: from 32% alcohol up to a whopping 72%. The bottles, all 700ml, are conversation pieces too: glass, clad in monocolor metallic paint from to to bottom, and etched with the Tatratea design.

While Tatratea is marketed for its versatility — it can be consumed hot, as a iced shot, or poured over ice cream — all of these were tasted using our usual procedure, neat and at room temperature.

Tatratea launches here in October, only at bars, and we were lucky enough to be one of the first media outlets to review the entire lineup. It will arrive at retail (at prices ranging up to $60) in 2012. A 22% version is also due in November.

The five products were tasted in the order they are presented below, at Tatratea’s suggestion.

Tatratea 52% Original – The base version of Tatratea offers a nose of fresh brewed tea and raspberries: The fruit character is distinct and on the palate it’s very long-lived. Sweet but not cloying, it’s a far cry from today’s tea-flavored vodkas, with notes of cinnamon, ginger, and licorice. At 104 proof, it’s quite warming and intense, a complex digestif that I would place somewhere in the world of amari. B+ [BUY IT NOW FROM DRIZLY]

Tatratea 42% White – Takes the base Tatratea and adds white tea, plus peaches. While very clear and quite engaging on the nose, the peaches are a bit cloying on the tongue. The finish veers more into bitter than I expect Tatratea would like. 84 proof. B

Tatratea 32% Citrus – Designed, according to Tatratea, for “soccer moms and an older crowd,” considering its “paltry” 64 proof makeup. Citrus flavor is the add-on here, and it works, giving a vaguely orange character to the liqueur, though not a distinct single fruit in the way the 42% White version is focused on peaches. Call me the older crowd (or a soccer mom, if you must), but I think this is the most balanced of the Tatrateas I tried. I think the lower alcohol level helps a lot. 64 proof. A- [BUY IT NOW FROM DRIZLY]

Tatratea 62% Goral Forest Fruit – Blueberry is the addition to the standard recipe here, plus, of course, another 10% alcohol, bringing this up to 124 proof. This is one of the best expressions going, that blueberry, as with the Citrus version, successfully balancing out the tea flavors. I would not have pegged this at 62% alcohol: It’s much more easygoing than the 52% liqueur. Although this version lacks some of the nuance of other versions of Tatratea, it’s still quite appealing. B+

Tatratea 72% Outlaw – The top of the line — alcohol-wise — is the same composition as the 52% but with more alcohol in it. Lots more. Called “bohemian” style by Tatratea, at 144 proof it goes toe to toe with some of the hottest spirits on earth. This, as they say, will put hair on your chest, but the spirit is quite a bit more complex than you might expect. Lots of cocoa up front, then smokiness on the finish, the ultimate effect being something like burnt cocoa beans. The tea gets a bit lost in the middle, but it’s plenty of fun to search for it… if you’re not too busy acting like an “outlaw,” that is. B+ [BUY IT NOW FROM DRIZLY]

Review: The Bitter Truth Apricot and Violet Liqueurs
Posted in Buy It Now, Liqueurs, Rated A-, Rated B, Rated B+, Reviews