When he stopped by with six bottles of domestic rice wine, I asked Dewey Weddington, VP of Marketing for Momokawa, why anyone would want to drink an American sake. The answer was not exactly surprising: Because it tastes good… just like American red wine is as good as French, just as American beer is as good as German. And in the case of Momokawa’s sake, that’s because, Weddington says, it uses the exactly same equipment and production methods as they do in Japan. But making sake here offers one huge advantage: Cost. By producing domestically, Momokawa saves on shipping and taxes, big time: The same bottles produced in Japan would cost $25 to $30 once they arrived on shelves here, instead of the $12 or $13 for which these domestic versions retail — and which are some of the country’s best-selling sakes.

Momokawa, part of the SakeOne empire, is produced in humble Forest Grove, Oregon, a rural community about an hour outside of Portland and just north of Oregon’s increasingly popular wine country. Why make sake here, I wondered? It’s all about the water, says Weddington: When SakeOne — which also imports a dozen or so brands of sake in addition to the ones it makes — was looking for a place to build its brewery, it tested the water in a variety of regions of the country. Forest Grove had what it was looking for: No iron and no manganese in the water supply, both of which muck with sake production in unpredictable (and usually funky) ways.

Momokawa’s sakes are all junmai ginjo varieties, and all are produced using California “Calrose” rice. Only the yeasts and filtration methods differ, and the two organic (green bottle) sakes produced use organic strains of rice. We sampled all six. Thoughts on each follow.

Momokawa Ruby Lightly Sweet Sake – Aged about 3 months, this has touches of sweetness (as the name suggests), and a good balance. The mouthfeel is round and the finish is long, offering some earth tones. B+ / $12 [BUY IT NOW FROM DRIZLY]

Momokawa Diamond Medium Dry Sake – A blend of Silver and Ruby. It offers a mix of the two styles, but they just don’t come together in the right way for me. This is my least favorite Momokawa offering, though admittedly I liked it more today — when fresh from the brewery — than the last time I reviewed it. B / $12 [BUY IT NOW FROM DRIZLY]

Momokawa Organic Medium Rich Sake – Green bottle = organic. This sake is produced in the same style as Ruby, but the ultimate impact is much different. It’s got a bigger and bolder attack, with a really robust flavor that offers better balance. Definitely worth the extra buck. A- / $13

Momokawa Organic Creamy Nigori Sake – The first of two nigori, or cloudy, sakes reviewed, this sake and Pearl (below) are identical except for the organic rice used. Big melon character works well with the slightly stronger (16% alcohol vs. about 14% for the four sakes above) alcohol content, giving this sake a good complexity to match its strong back. A- / $13

Momokawa Pearl Creamy Nigori Sake – At 18% alcohol, it’s a bit of a bruiser, and has more heat to it than I’d like. Big and intense, with a tart finish, and it plays with a lot of sweetness and chewy fruit in the body. This style of milky white sake is looked down upon in Japan, but it’s the top selling type of sake in the States. Curious. B / $12 [BUY IT NOW FROM DRIZLY] 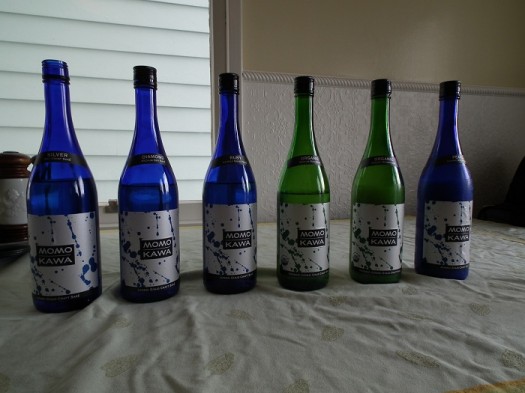