The Dominican Republic’s Brugal continues its march into America — it’s the #1 selling rum in the Caribbean currently — with another offering, bringing its total portfolio to four rums and, for the most part, rounding out its offering with a complete lineup of rums from silver to extra-extra-old.

I sat down with maestro ronero Gustavo Ortega to take a deep dive into Brugal’s history and production — largely via his translator and brand manager Juan Campos — at Drinkhacker HQ. I’m on record as being a big Brugal fan — great quality at a very reasonable price — and after this guided tasting through the line, I’m happier than ever.

First some notes about the distillery: Brugal is actually owned by the Edrington Group, which owns Macallan and Highland Park Scotch, among other spirits. The focus is always on quality, and Brugal, like its other hemispherical friends, is obsessive about the wood it uses. Production is pretty huge: 75,000 liters daily, with 250,000 casks aging on site.

All of the rums covered below are blends of a rums from a variety of ages and are released at 80 proof in the U.S. — with slightly different proof levels in other countries. Here are thoughts on the full line.

Brugal Ron Blanco Especial – Brugal’s “white rum” is aged two years, then filtered back to white in the classic Puerto Rican (and other regional islands) style. In fact, by law, rum must be aged for at least one year before bottling in the Dominican Republic. This white rum is crisp and clean, with a light citrus character and a touch of vanilla on the finish. Not too oily, it’s got a good body and an easy, not-harsh finish. A- / $20 [BUY IT NOW FROM CASKERS]

Brugal Ron Anejo Rum – Aged 2 to 5 years, we didn’t taste this expression during this event, since I just reviewed it, which you can read here. A- / $20 [BUY IT NOW FROM CASKERS] 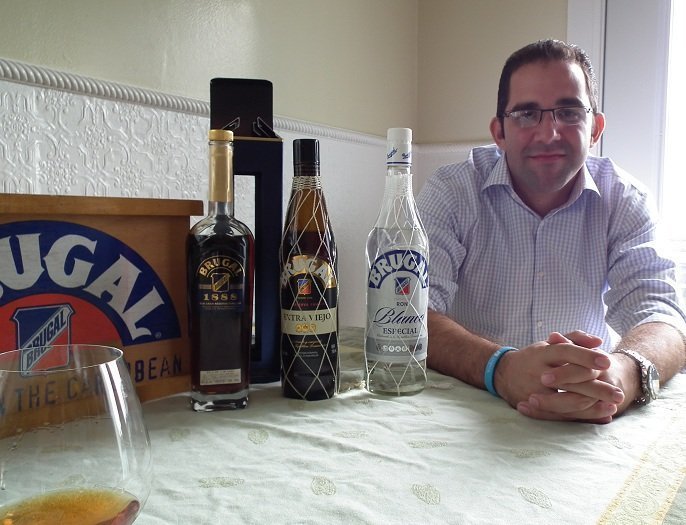 Brugal Extra Viejo Rum – I reviewed this rum, aged 3 to 8 years, in 2009. Now it is repackaged and rebranded, with a more upscale look, though it’s still very affordable. A sedate rum, it offers caramel, coffee, cinnamon, and lots of balance. It’s not cloyingly sugary, but perfectly set between sweet and savory. This batch could be a touch muted since my ’09 review, but it’s still an A / $27 [BUY IT NOW FROM CASKERS]

Brugal 1888 Ron Gran Reserva Familiar (pictured) – The latest expression, released in August, is a real conversation piece. Rums aged for 6 to 8 years in ex-Bourbon casks (as all of the above are aged), are then transferred to ex-Sherry casks for another 2 to 6 years. To give you a sense of how pricey this must be in the Caribbean: After 8 years, Ortega says that just 30% of the original barrel is left in a cask, the rest having gone to the angel’s share due to the intense heat and humidity. With 1888, Brugal is losing up to 80 or 85% of its spirit to evaporation. What’s left is pretty insane for rum: Intense sherry notes up front, with citrus peel all over the place. The body is huge — hotter than most Brugal rums, surprisingly, and complicated with charred wood notes, sherry (of course), and herbal touches. The sweetness hits you mainly in the end. It’s a rum for the whiskey drinker — just, I presume, as Brugal’s owners would want. A- / $50  [BUY IT NOW FROM DRIZLY]