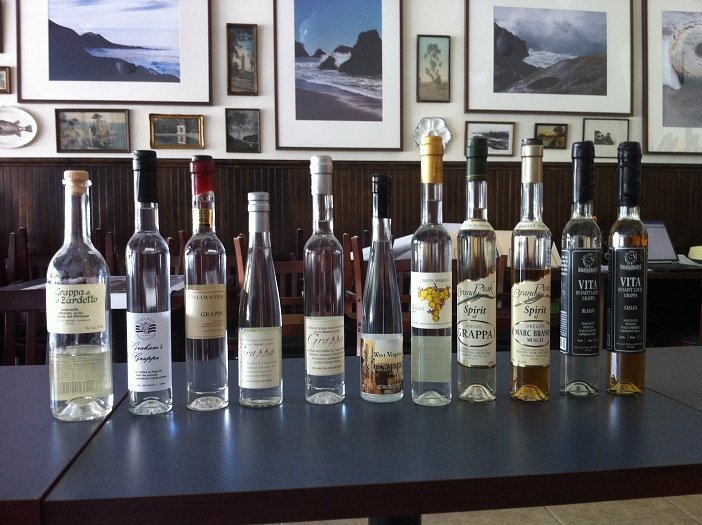 Grappa, something of a national spirit in Italy, doesn’t have to come from the famous country. Anyone can make the stuff — and, arguably, it’s far easier for a grape-grower in, say, Virginia, to produce good grappa than good wine.

Recently I gathered with friends to sample and compare a host of grappas from all around our fair country, along with a few Old World ones, too. This wasn’t a formal review — and I’m not grading the spirits discussed here — mainly because you’ll probably never see any of these in the wild.

Our adventure covered the following territories:

…plus a pair of Italian grappas

Favorites? Stillwater’s Cabernet Grappa was traditional in the nose — with olive pit and nut aromas — but proved complex, with a burnt caramel saltiness and sweetness on the tongue. Fans of traditional Italian grappa will likely enjoy this one.

Peach Street’s Viognier grappa was also a winner, fruity with apple notes and a fun chocolate finish; oddly, the Muscat grappa from the same distiller was too overpowering with citrus notes and an astringent body.

Still, nothing really compared to La Grappa di Pino Zardetto, a grappa made from Prosecco, vibrant with aromatics, honey, flower, and fruits, but all perfectly balanced. It’s a grappa for the both the grappa novice and the pro, and a winning example of how great good grappa can be.

What of the rest? As with all sorts of spirits, these grappas occupied a range between passable to awful, the worst coming off like nail polish remover and the better ones offering some nuance, but often drifting back into grappa’s old habits: fuel overtones and overpowering earth character.

All told? A really informative tasting that proved to me that you don’t have to be Italian to make good grappa… but it certainly doesn’t hurt.