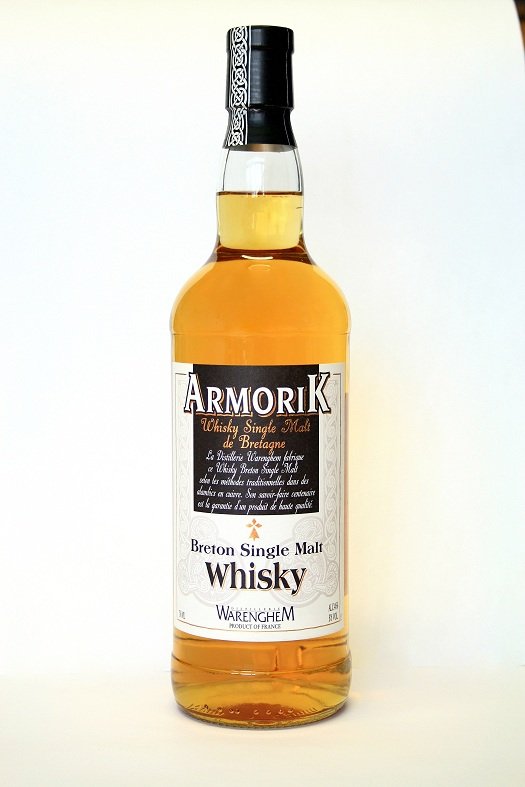 Cognac may be the national spirit of France, but doggone it, the Gauls make whisky, too. Single malt whisky, and a pretty good one at that, courtesy of Armorik, a distillery located in Brittany, on the far northwestern tip of the country, wedged between the English Channel to the north and the Bay of Biscay to the south.

Armorik is made very much in the style of single malt Scotch: French malted barley is double-distilled in copper stills, aged in ex-Bourbon and some refill Sherry casks, and bottled at 80 proof after cutting with local water. No age statement is offered, but it’s obviously on the young side.

That’s not a slam, because Armorik is very fresh and lively, offering honey, apple, malty bread, and nougat notes atop a smooth and silky core. If I didn’t know better I’d swear this was a Scottish malt, touched with a bit of smokiness (is there peat in Brittany?) and seaweed/iodine notes that blow in from aging in warehouses surrounded by the sea. The finish is where things start to get a little rocky, and Armorik’s youth becomes evident: The notes of young whiskey, with bigger raw grain underpinnings than a more mature spirit would reveal. It’s forgivable considering the uniqueness of this spirit — and the bets you’ll be able to win with your whisky nerd friends should you obtain a bottle — but I’d love to see what another 4 to 5 years in cask, or, perhaps, a Port or Sauternes finish, would do to this very intriguing malt. How could the French complain about a wine barrel finish, anyway?