Benziger is a brand often associated with the supermarket, but like many mega-brands, it also has a wide array of more upscale bottlings. Recently I had the chance to taste through six of its biodynamic selections with owner Mike Benziger and some other wine blogger types.

None of these wines are actually sold in stores, only on the company’s website and in its tasting room. Here are thoughts on each.

2008 Benziger Joaquin’s Inferno Sonoma Mountain Zinfandel/Petite Sirah – 73% Zin, 27% Petite Sirah. Named after the vineyard manager at Benziger… and a hellish part of the Benziger estate vineyard which is so steep that farming it is nearly impossible. The wine is pretty mellow for a Zinfandel, not overly jammy but still clearly in the neighborhood of “big Zins.” Nice smoothness and a touch of acidity. Like the blueberry. I’m not normally a Zinfandel fan but this works — compared to its class. A- / $50 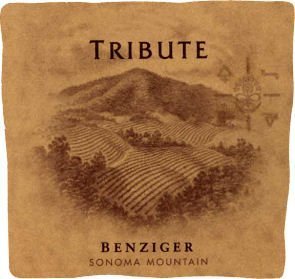 2007 Benziger Oonapais Red Sonoma Mountain – The blend is similar but not disclosed in detail. Bolder on the nose and with more tannin. A much different wine, big and powerful and a far cry from the 2006. A different experience and, arguably, a better one. A- / $50

2007 Benziger Obsidian Point Cabernet Sauvignon – Lots of sediment here and in the 2008, but after dealing with that you’ll find nice tea and tobacco notes on a tannin-oriented structure. Opens up with time, but there’s some greenness that lingers. B+ / $65

2008 Benziger Obsidian Point Cabernet Sauvignon – Even younger, and probably best left in bottle for another year. Woody on the nose and palate, and with lots of green vegetable notes. 2008 probably won’t reveal itself to be the greatest of years, but a drinkable wine, to be sure. B / $65

2007 Benziger Tribute – Another Bordeaux style wine with a curious blend (84% Cab Sauv, 10% Cab Franc, 3% Merlot, 3% Petit Verdot), from Sonoma Mountain. This is the big, fancy-name wine, but it’s more easygoing, less monstrous, than you might think. Chocolately, chalky, and moderately tannic, it’s got plenty of oomph, but the structure isn’t there. This isn’t a “deep” wine that invites a lot of exploration, but rather one of those wines where you’d say, “Yeah, I could drink that if I had a steak handy.” B+ / $80