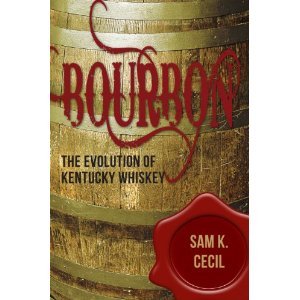 Those expecting a sun-dappled romp through the state of Kentucky in Sam K. Cecil’s Bourbon: The Evolution of Kentucky Whiskey we be in for a bit of a surprise. Cecil, who got started in the Bourbon industry four years after Prohibition ended in 1933, has written a tome which dutifully outlines how Bourbon is made, how Prohibition impacted its production, and how the industry never really recovered thereafter, losing out to international brands and distilleries that had long since fallen into disrepair or were simply torn down.

But that is just the setting of the scene. Cecil is actually much more concerned not with the how of whiskeymaking but with the where and the who. After 80-some pages of background, Cecil spends the next 200 digesting just about every distillery that has every existed in the state of Kentucky, where it was located, what it was (variously) called, and which hands of ownership it passed through. Some distilleries are given just a paragraph, while more hallowed facilities, like E.H. Taylor (now known as Buffalo Trace), get several pages.

Faithfully indexed, chances are if you’re looking for information about your favorite tipple you’ll find it covered in Cecil’s book – although the book is focused on distilleries instead of brands. It’s an important distinction: If you want to find, say, Bulleit, Black Maple Hill, or Noah’s Mill, you won’t find them covered in these pages.

If you’re looking for a reference book of Bourbons – especially old and/or defunct ones – this is a good place to start, though the writing is a bit dry and its simple utility, in the modern era, is muted.

Bourbon: The Evolution of Kentucky Whiskey