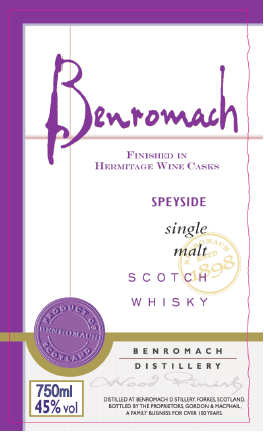 Wine barrel finishes are hardly unique, but Benromach’s latest, very limited release is the first time I’ve seen barrels used in the Hermitage region of France (via Rhone Valley regulars Guigal) used as a finishing wood. This whisky spends an undisclosed amount of time in ex-Bourbon and ex-Sherry oak before being transferred into Hermitage casks, where it waits another 22 months before bottling at 90 proof.

The result is a moderately amber whisky with a huge body to it. There is lots of peat and smoke on the nose, and even more in the body. Huge wood notes are the predominant character, but some nougat and a touch of spice can be found here, mainly on the finish. It is compelling but elusive, its constituent components never really becoming cohesive, with that overwhelming wood character socking you repeatedly in the face.

Hermitage wine character? You won’t really find it here. Unlike the way that some wine finishes — Sauternes or Madeira, especially — play out, the Hermitage doesn’t ultimately add much to the mix.

Ultimately this is an incredibly difficult whisky to put your finger on, but if nothing else it suffers from a balance problem — either from too much time in wood, or, more likely, just in the wrong kind.

Note: This whisky is often and incorrectly labeled on shelves and various websites as “Benromach Heritage Finish.”