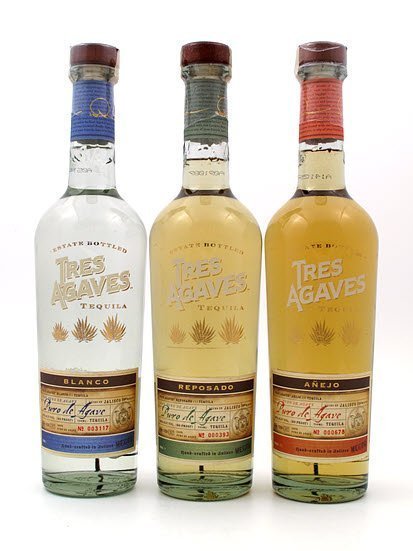 The spawn of some old-school tequila execs (and a spinoff of the Tres Agaves restaurant, now just called Tres), Tres Agaves burst on the scene last year as another producer of high-quality, 100% agave tequilas. The company also makes a very good agave nectar and naturally-flavored margarita mix, with key lime and agave nectar as main ingredients.

We tasted both the blanco and reposado tequilas. Both are 80 proof.

Tres Agaves Blanco Tequila – A very archetypal blanco, with a big agave nose, punchy agave on the palate, then a finish that soothes that beast with a touch of sweet vanilla and lemon. Some lingering bitterness follows. I was a bit curious that this might have actually seen a week or two of barrel time before release as a way to rest the spirit, but that seems not to be the case? All in all, a solid margarita tequila. B / $28 [BUY IT NOW FROM DRIZLY]

Tres Agaves Reposado Tequila – Aged in ex-Bourbon barrels (a variety of companies’ barrels are used) for 6 to 9 months. This tequila is a total surprise. Very green in character, perhaps more so even than the blanco. Big agave notes remain surprisingly prominent, punctuated with black pepper, lemongrass, and wood. But the sweetness of the blanco is inexplicably gone here, leaving you with a punchy and quite bitter finish. C+ / $33 [BUY IT NOW FROM DRIZLY]