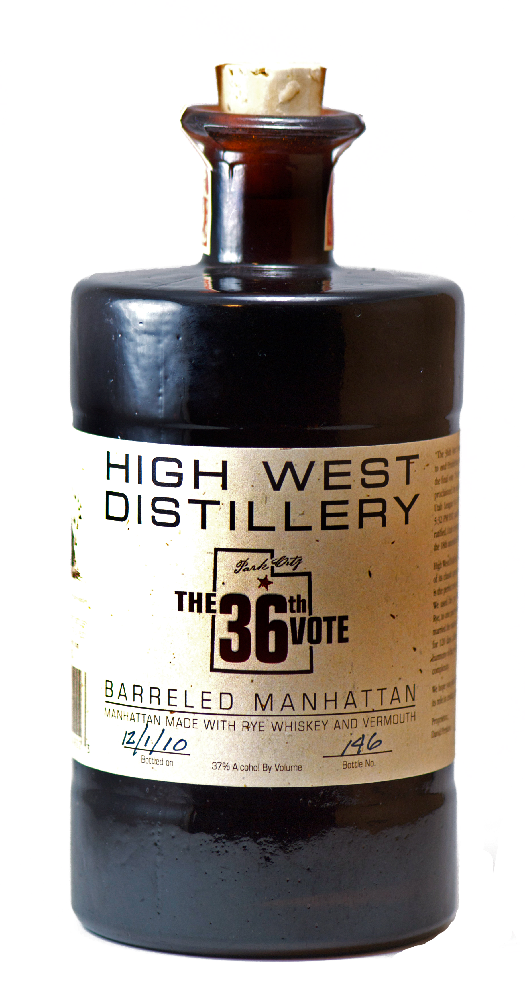 If a cocktail requires no fresh juices or other highly perishable ingredients, why not just bottle it outright?

Now this isn’t some rotgut nonsense, 10 percent alcohol bullshit in a single-serve bottle. It’s the real deal, and top shelf at that.

The recipe is authentic: 2 parts rye (High West’s 95% rye is used) to 1 part sweet vermouth, plus 2 dashes Angostura bitters. The company notes that this isn’t as easy as it sounds: You can’t just drop “off the shelf” vermouth in and resell it: Once federal excise taxes have been paid on booze, it can’t be repackaged and resole. So the Utah-based High West had to buy wholesale, pre-tax vermouth in bulk.

The mix is then put back into an oak barrel (formerly used for rye) for 120 days — and High West says that the cocktail doesn’t oxidize during this time.

Results: Incredibly impressive. This is for all intents and purposes a high-grade Manhattan like you’d get at any upscale bar. It’s a little sweeter than I might mix up, but that makes it incredibly easy-drinking. Lots of red cherry fruit character here, with that spicy rye especially evident on the nose. Go easy on the ice, or you’ll kill off some of the character here — it’s drinkable even warm, like a good whiskey. Add a cherry if you’re feeling decadent.

Incidentally, High West also sent along the un-aged version of this cocktail for comparative purposes (it’s not for sale), and it’s amazing to see how much more of a hard edge it has in comparison. With that barrel time, the cocktail gels sweeter, too — much like any whiskey — and more character. The un-aged version is a straightforward and very good tipple. The aged version is a modern classic. Bring on the ultra-high-grade pre-mixed Martinis and Sazeracs!

(The story behind “The 36th Vote” is left as an exercise for the reader.)