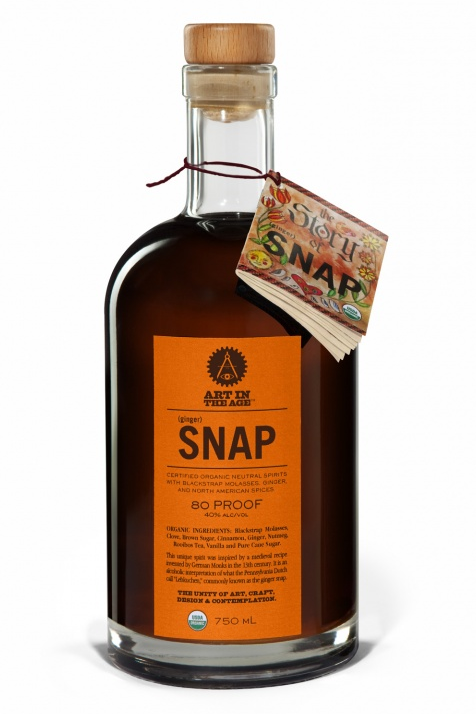 The makers of Root — which has found a bit of a foothold in bars around the country, based on my observation — have seen fit to extend their product lines. Now we have Snap, another sweet, artisinal liqueur inspired by the kitchen delights of our collective youth.

Snap is born from a 1600s recipe for ginger snap cookies (“lebkuchen,” as they were known in Pennsylvania Dutch country), taking its ingredients and turning them not into sweet treats but into booze. Nutmeg, clove, cinnamon, ginger, brown sugar, vanilla, blackstrap molasses, and Rooibos tea comprise the recipe here.

Intrigued? AitA’s boozy root beer was a credible replica of the real deal, but Snap has a bit more trouble with the transition. For starters, it comes across as a bit too alcoholic, though time in the air opens it up a bit. At that point, molasses becomes the scene-stealer. That’s not a surprise — they don’t call ’em “blackstrap” for nothing — but it makes Snap end up tasting more like rum than a complex liqueur. Ginger takes a back seat even to cinnamon and vanilla in the mix, giving the spirit more of West Indies feel than anything your suburban mom might have given you.

Snap grew on me over time, particularly as air let some of Snap’s heavy alcohol out of the glass. But in the end, I wished I’d rather been sipping a nice aged rum, many of which are startlingly similar, but surprisingly (since they have fewer ingredients) more complex and, yes, a little cheaper, too.

"Art in the Age" Snap Liqueur