I Took the Cachaca Challenge 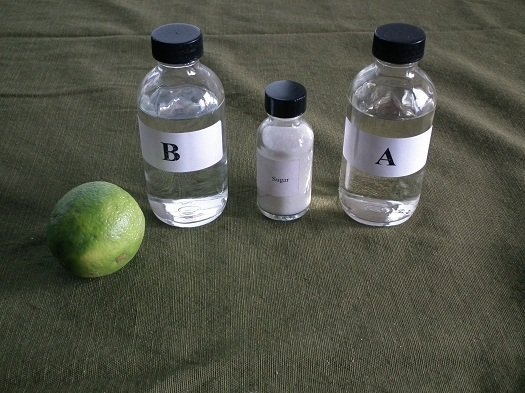 There is nothing more fun – or terrifying – than doing a blind head-to-head tasting of wine or spirits. What if everything you thought you knew was wrong? What if it turns out you like Gallo from a jug better than Screaming Eagle? (Answer: Well, then, you’re lucky. You’ll save a lot of money down the road.)

Recently I was given two vials of cachaca labeled A and B, some sugar, and a lime. My goal: Try the cachaca straight, then try it in a caipirinha, and report back to the agency putting on the event which I preferred.

I tasted them backwards…

Cachaca B was a clear, traditional cachaca, full of petrol notes but balanced with a little sweetness and citrus. Not much to it, a lot like a simple rum. (spot rating: B+)

Cachaca A was tinted light yellow, clearly one which had seen some barrel time. Much fruitier than A, it had lots of lemon oil and orange notes. Racy with aromatics, it was spice, flowers, and caramel/vanilla character from the time in wood. But still it was a cachaca at heart, as the petrol overtones made clear. Long, long finish here. (spot rating: A-, on the fence)

But what happened in a caipirinha? I made two cocktails identically, right down to the number of ice cubes, muddling lime and sugar, and adding the spirit and rocks.

Cachaca B made a very good caiprinha, pleasant and very much like a margarita. Clean and unfussy, it was easy to sip.

Cachaca A was overpowering: It stood up to the lime and sugar and made itself known, giving an astringency to the drink that was matched only by the floral and aromatic notes that followed. More complicated and intriguing, at first I preferred this one… until, five minutes later, I just couldn’t get that floral taste out of my mouth. While Cachaca B’s caipirinha finished clean, Cachaca A was too much, with a strong, almost salty aftertaste. I was reminded of my recent pisco tasting, where the stronger, mosto verde pisco was too much for a pisco sour to handle, and the simpler, acholado-style spirit turned out to work better in a mixed drink.

Just goes to show: Just because you like something on its own, doesn’t mean you’ll feel the same way once you start adding stuff. (And vice versa!)

And now for the identities (revealed after I submitted my ratings)…. Cachaca B was Cabana (then: B+), and Cachaca A was Leblon (then: B+).