This could be a first for vodka makers: A company releases a second, unflavored vodka, different only because it was produced with a different base grain.

Chopin is a relatively uninspired potato vodka, and now the company is back with a vodka made from rye. Chopin “Red Label” is crafted from 100% Polish rye and it couldn’t be more different from its big brother.

Chopin Rye features a big body, with intense spice on the palate. There’s a mountain of earth here, a mushroom-like quality that is uncharacteristic of rye spirits and gives Chopin Rye a surprising depth. It is also a very strange way for vodka to taste. I’m a fan of vodkas that move beyond “grain neutral” and exhibit a real and unique character, but this one almost has too much to go around. All I can taste is barnyards and mushroom fields when sipping Chopin Rye, giving this vodka a rustic feel that is at odds with its elegant ideals.

Bizarre yet oddly compelling in its own strange ways. An outlier oddity for vodka fanatics.

UPDATE: I’m wrong. Van Gogh introduced an unflavored vodka from a different base grain in 2009. We even reviewed it, then promptly forgot about it. 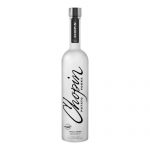