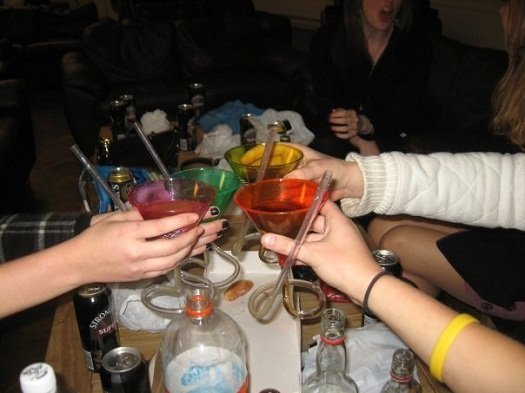 This is the first and likely the last review of a plastic cup to appear on Drinkhacker, for reasons that should already be obvious.

The idea behind the vessel is, in the company’s words: “Sliz cups are a new drinking product designed to eliminate the cringe between taking the shot and reaching for the chaser.”

In practice, the Sliz cup is a plastic martini glass with a straw attached via the stem. Here is how it is meant to be used: Booze goes in first, and a chaser goes in second. When you drink the concoction, you get all the booze first, via the straw, then the chaser immediately follows. The idea is that you get no delay between the two, making it easier to suck down that shot — as long as you don’t stop in the middle of your sip.

This is, as promised, an “easy” way to do shots, but it suffers from a couple of obvious flaws: The most obvious one is that there is simply no dignity in drinking this way. If you are over the age of 21 and are not in a sorority, there’s really no excuse for using a Sliz. It is, in essence, a beer bong for hard alcohol. Not exactly “discriminating,” no. (Plus I have no idea how you wash the thing.)

That said, it does seem to work as advertised: If you can’t handle the two-second delay between, say, downing a tequila shot and sucking on a lime, well, this is one way to put them together in one incredibly goofy package. Or, I guess you could just have a margarita.