In one corner we have Campari, the classic, bright-red bitter spirit that’s a key part of the Negroni and other ultra-bitter cocktails. In the other, cross-country foe Gran Classico, from Tempus Fugit Spirits. How do these bitter aperitifs measure up? Let’s find out!

Campari is made in Milan, Italy and has been around for 150 years. A pungent infusion of various fruit and herbs — and natural red coloring — Campari is intense on the nose with cloves, cinnamon, and some lemon notes. The taste is initially sweet, then the bitterness comes on strong. It’s actually quite pleasant to sip neat, much like a Fernet, and the bitterness is bracing. The red color, though, starts to mess with your head when it’s alone in a glass. It’s hard to shake the idea that you’re drinking pre-Jello or melted Jolly Ranchers… though the body thankfully doesn’t back that up. 48 proof. A- / $22 / campari.com [BUY IT NOW FROM CASKERS]

Tempus Fugit Gran Classico (2011) was originally made in Turin, Italy but is now produced in Switzerland. It’s incidentally also about 150 years old. A more natural burnt sienna color, it looks more appealing in the glass, but the nose is immediately odd, a woody and earthy beast with a sort of, dare I say, rhubarb character to it. The body is quite sugary up front, and the bitterness that follows is about on par with Campari. Then Gran Classico throws a twist: It doesn’t linger on the bitterness, it finishes with a slight return to sweetness. Curious, but it’s not quite enough to make Gran Classico as interesting as, say, a Fernet. This is an aperitif with some interesting characteristics, but it’s lacking the balance and nuance of Campari. 56 proof. B / $30 / tempusfugitspirits.com [BUY IT NOW FROM DRIZLY]

Italy wins the round! 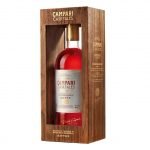