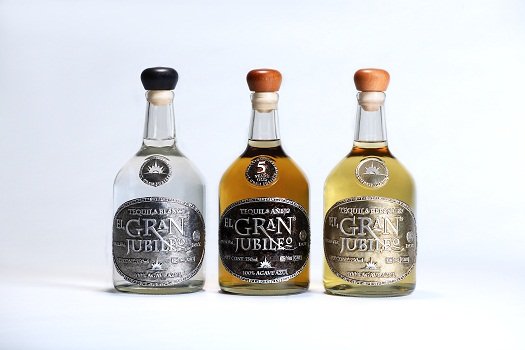 This tequila brand has been available in Mexico and in limited distribution at that. Now it has arrived on U.S. shores, you can try it too. All expressions are 100% agave of course and are 80 proof.

El Gran Jubileo Blanco – For those who like a lot of agave, but not so much bite, this is the blanco for you. Triple distilled, it is not a tequila with a lot of nuance, but one that speaks to the purity of the plant from which it came. Hunt in the body and you may turn up some light vanilla and lemon notes, but in the end it’s that agave that just pours over you. B+ / $30 [BUY IT NOW FROM DRIZLY]

El Gran Jubileo Reposado – Aged for 10 months in new American oak (not ex-Bourbon) barrels, Jubileo’s Reposado ventures close to anejo territory. The nose is heavy with wood, replacing the agave that you find with the Blanco. The body is sharp and woody, then it fades into big vanilla notes. A touch of agave reminds you you’re drinking tequila, and after it mellows out a bit with some time open to the air, a pretty good one at that. A- / $35 [BUY IT NOW FROM DRIZLY]

El Gran Jubileo Extra Anejo – Whoa, no one told Jubileo it goes from Blanco to Reposado to Anejo, not Extra Anejo? This monster spends five years in those white oak barrels, giving it a deep amber hue. The nose is quite mild and mellow. The body is gorgeous, sweet and silky, the wood giving the tequila loads of vanilla and light chocolate character. Nougat and nuts give this a huge dessert feel. Drink it with your flan. A massive bargain. A / $65 [BUY IT NOW FROM DRIZLY]