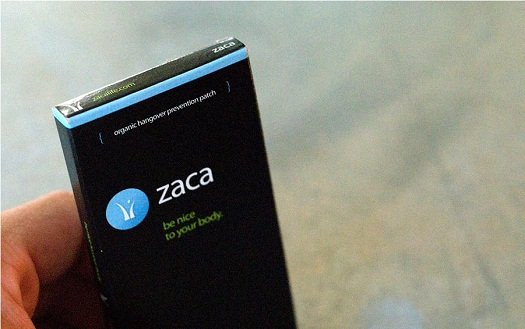 I’ve reviewed all manner of hangover remedy products in the last few years, but Zaca takes the cake for the strangest one of all: It’s a patch that you wear on your body (a la a nicotine patch) while you drink (and on into the next day), designed to combat the effects of alcohol without you having to swallow a thing.

File under “it’s so crazy, it just might work.”

The tiny mesh bandage is organic and all-natural, and the ingredients are as follows: Vitamin C, Lycopene, NAC, B1, Prickly Pear, B5, B3, Magnesium, Taurine, Lipoic Acid, and Milk Thistle, all in 1mg to 5mg portions. I can’t comment on how well any of these elements absorbs through the skin, but I will say that I was impressed with how well Zaca seemed to work. (Though with these kind of things, you never really know.)

I put the patch on an hour before going out for the evening, and when I got up in the morning I felt just fine. The only possible side effect I experienced was having to pee more than I normally might have had to.

The cool thing about Zaca is that you slap it on before you go out — when you might actually remember it. So many hangover products require drinking some nastily-flavored liquid, making the cure worse than the problem. Pills meant to be consumed while you’re drinking are also a problem: I don’t have a purse, where do I keep these things? Morning-after pills are fine… but by then the damage is done.

I was skeptical of Zaca at first, but it really does have all the hallmarks of a great idea: It’s as tasteless as humanly possible (since you don’t eat it), it prevents hangovers rather than remedies them, and it seems to actually work. It can even slip into your wallet… in case of emergency. Give it a whirl.