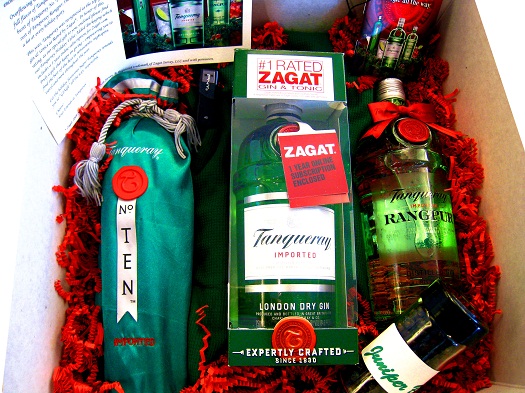 A reader recently complained (or kvetched, perhaps) that I didn’t review enough accessible products, stuff that you’d find on the shelf of your average liquor store and didn’t cost five figures.

Fair enough, so here you go.

It doesn’t get much more mainstream than Tanqueray, the British gin (produced in Scotland, actually) which is one of the best-selling spirits in the world.

Tanqueray exists in the U.S. in three varieties now (there’s also a vodka), and I recently received a holiday kit from the company so I could try them all side by side.

Here’s how they stack up.

Tanqueray London Dry Gin is the standard-bearer, and the company provides the identity of only three ingredients — angelica, coriander, and juniper. The rest are secret. [It’s said there is only one more: licorice.] That said, all one really needs to know — or tastes — in Tanqueray is the juniper. Along with Beefeater, I think it’s one of the most juniper-heavy gins on the market. Obviously people are into that: “Tanq & Tonic” is one of the most-called-by-name drinks of all time. The juniper nose is rich and strong on the palate. Secondary flavors are elusive, but you’ll find mildly bitter lemon and orange peel if you hunt for them. That evergreen character is all-encompassing, and as with heavily-peated Scotch, you either like this or you don’t. I find Tanqueray grows on you over time, but my ultimate gin preference is always to seek something with a little more balance and nuance. 94.6 proof. B / $17


Tanqueray No. Ten (10) (2010) strikes an immediate impression in its iconic, monolithic bottle, one of the best-designed decanters on the market. The gin inside clearly adheres to the Tanqueray formula, but it extends that with a bit more citrus. The company claims it is the only gin to use handpicked fresh fruit in its distillation, including white grapefruit, orange, and lime. There is also chamomile in the mix, a curious addition. What comes through in the finish is, of course, juniper, and all three of the citrus fruits mentioned. Grapefruit, for sure, with orange and lime more of an afterthought. I definitely prefer Ten to regular Tanqueray, and arguably worth the upgrade in price. 94.6 proof. A- / $28

Tanqueray Rangpur adds Rangpur limes to the Tanqueray recipe, and the results are obvious. The nose only hints at citrus, but it’s the finish where those limes — almost like tart Key limes — come to the forefront. Whereas standard Tanqueray can be overpowering with juniper, Rangpur is overpowering with lime — almost chemical in the way it comes across. The flavor is actually bigger and more powerful than standard Tanqueray — this despite a cut in proof of more than 12 points. The ultimate effect is more like a lime-flavored vodka than a gin, though it doesn’t eschew juniper character altogether. Not my favorite Tanqueray expression. 82.6 proof. C+ / $21 [BUY IT NOW FROM CASKERS]