As it did with “Torched Cherry,” Bacardi continues its tradition of double-flavoring rums and giving the finished product one, nonsensical name.

Bacardi Rock Coconut is naturally flavored with rock melon and coconut water, hence, I guess, “rock coconut.” Rock melon, by the way, is a fancy name for cantaloupe.

As for the character of this rum, the emphasis is certainly on the coconut here. It’s strong on the nose and the body, and only if you leave the rum in your mouth for several seconds do you get any sense of fruit here, and even then it’s vague, mainly citrus in tone.

Frankly I’d wanted a little more coconut out of this, and it certainly could have used some more of the “rock” that’s promised. All told, your typical beach-goer isn’t going to be able to tell the difference between this and Malibu in his fruity cocktail, but it doesn’t really offer anything special to elevate it above the competition. 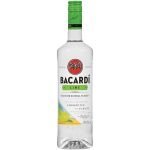