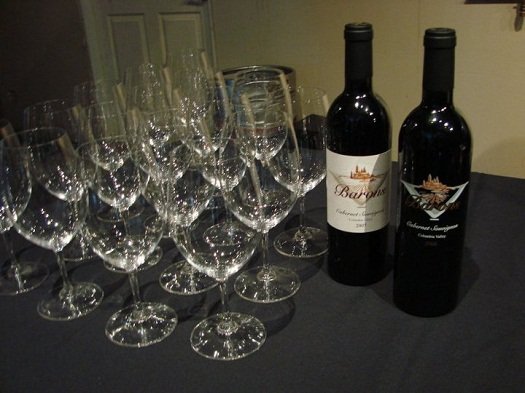 Vine & Sun is a Washington-based winery that is primarily known for its Barons V label. It also bottles a budget wine under the Vine & Sun label. We tried both wines, with commentary below:

2007 Vine & Sun Red Wine Columbia Valley – A fairly standard, Cab-heavy red blend of unknown proportions. Jammy and young, without a lot of complexity. Herbal and plum notes are the standard bearers here. Simple finish, not much to it. (Update: Blend is 65% Cabernet Sauvignon, 21% Cabernet Franc, and 14% Merlot.) B- / $18


2007 Barons V Cabernet Sauvignon Columbia Valley – A blend: 84% Cabernet Sauvignon, 7% Merlot, 5% Cabernet Franc, 4% Petit Verdot. This is a more intriguing wine, and it’s obviously had more thought put into it. Green pepper notes hit on the attack, alongside a blackberry-laden and a moderate amount of tannin. The finish evokes mountain herbs. Less easy-drinking than the Vine & Sun but with more to it. The price remains a hard sell. B+ / $55