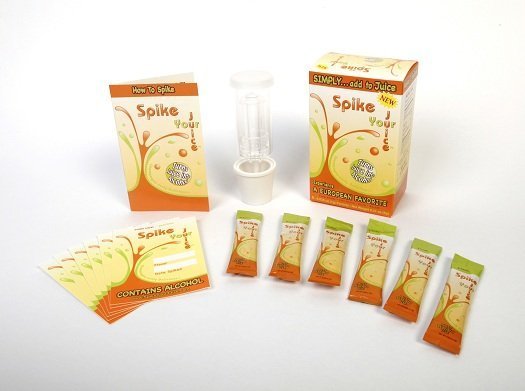 I’ve seen some weird stuff in my day, but Spike Your Juice is pretty much the strangest of them all.

Put simply, Spike Your Juice is a system for turning ordinary fruit juice into good old-fashioned hooch. Inside the colorful box you’ll find a few little mystery packets. You pour the packets into an off-the-shelf 64-ounce bottle of fruit juice (no artificial sweeteners, no refrigerated juice — essentially that means cranberry or grape juice — and let ‘er rip. You stop up the bottle with an included airlock, and wait 48 hours. Presto, you’ve got booze.

OK, the mystery should be easy to solve. What’s in the little packet is yeast (plus a little extra sugar), and that yeast goes to work on all the sugar in the juice in relatively short order. It takes only a few hours for the juice to start bubbling and blurping a gray/purple scum into the airlock, and it’s clear Spike Your Juice is hard at work. The juice is said to reach a maximum of 14% alcohol, putting it on par with wine. That’s right folks, you’re making homemade pruno, sans the dirty socks and the trash bag.

What does the end result of Spike Your Juice taste like? It’s surprisingly fizzy on the tongue, and it has a clear alcohol bite. But it’s sweet — at least after the first two days (the company says it will become drier the longer you let it sit). At first, not unpleasant — like a really cheap red wine that’s been bottled by someone with dirty hands — and then the aftertaste gets you. Musty and funky, it’s got a kick that, as my aunt used to say, will bite you back.

I can still taste it.

Rating this one just does not make sense, as I can only see it being attempted out of morbid curiosity, a dare, or both. Supposedly hugely popular in Europe.

$10 for six packets (enough for 3 gallons of hooch) plus airlock / spikeyourjuice.com

Three Days on the Juice with Urban Remedy
Posted in Hangover, Reviews, Wine