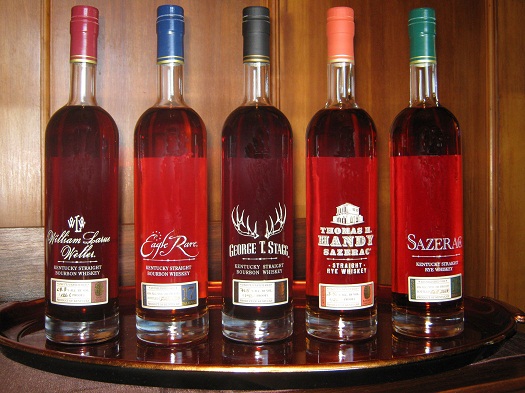 For the third year running, we’re fortunate enough to check out Buffalo Trace’s limited release editions of five highly-sought-after whiskeys. No change to the lineup, name-wise, from the 2008 and 2009 editions, although what’s inside the bottles is, as always, just a little bit different. On the whole, this year’s whiskeys, in fact, are some of the best renditions yet. Get ’em while they last!

Sazerac Rye 18 Years Old 2010 – An outstanding entry this year. Sazerac’s 18 Year (rye, with corn and barley in the mash) features a misleadingly mellow nose, but take a sip and it positively attacks the palate with huge rye notes. Gorgeous incense, burnt sugar, and flowery lavender notes are in abundance. Sweet and spice are in perfect balance here, and the overall whiskey is much more effective and perfected than 2009’s edition. A masterpiece of the rye world. 90 proof. A [BUY IT NOW FROM DRIZLY] [BUY IT NOW FROM FROOTBAT]

Eagle Rare Bourbon 17 Years Old 2010 – Another hit from Eagle Rare, but the finish is very dry and woody, still a bit like gnawing on a stick. Again it’s not quite back at the pinnacle of 2008’s release, but at least it’s comparatively easy-drinking compared to some of the alcohol bombs in this lineup. 90 proof, again. A- [BUY IT NOW FROM DRIZLY]

George T. Stagg Bourbon 2010 – Always the showstopper, this year’s Stagg is a bruising 143 proof. This edition of the Bourbon is 17 years and 7 months old and it’s a classic as usual. Cut it down and you get the essence of wood up front, with a smooth, creme brulee, cinnamon, and apple pie finish. It’s as American as playing baseball and being too lazy to vote. Another winner that you’ll savor all night. A [BUY IT NOW FROM CASKERS] [BUY IT NOW FROM DRIZLY]

William Larue Weller Bourbon 2010 – Back down in proof to 126.6, but still hotter than Hades. 12 years and 3 months old, making it a bit more austere than 2008 and 2009. This one absolutely demands water, at which point it reveals nothing but caramel all over the place. 2009’s Weller was full of fruit character;  in this one the fruit takes a back seat, but it still makes itself known in the finish. Much better balance, once it’s cut down to size. The best Weller I’ve had in awhile. A-  [BUY IT NOW FROM CASKERS] [BUY IT NOW FROM DRIZLY] [BUY IT NOW FROM FROOTBAT]

Thomas H. Handy Sazerac 2010 – Another rye/corn/barley blend, at 126.9 proof, aged 6 years and 3 months. Handy is always the underdog of this lineup, and compared to the Sazerac rye, it’s short. While it’s extremely hot (and very sweet), the body is muted in comparison to Sazerac’s well-aged masterwork. The honeyed character grows on you, but it lacks that punch and kick that really good rye ought to have. B [BUY IT NOW FROM DRIZLY] [BUY IT NOW FROM FROOTBAT]

$65 each [BUY THE COLLECTION FROM FROOTBAT]