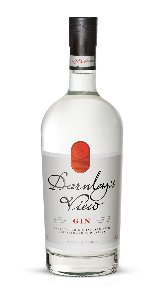 Wemyss (pronounced “WEEMS”) is well-known for its line of Scotch whiskys, and now the Wemyss family is taken an enormous leap into the world of white spirits, offering its first ever gin.

Darnley’s View is a London Dry Gin, flavored with just six botanicals, a scant number in a world of gins that commonly see 15 or more ingredients in the mix.

Darnley’s View is largely traditional, with juniper, lemon peel, coriander seed, angelica root, and orris root in the mix. The one big addition: elderflower, practically a weed on the Wemyss estate. It’s quite evident here, with that sweet lychee character giving the gin a charming, exotic character without being overpowering. What’s missing? Some orange peel — a traditional element in gin — would have added more balance — and frankly, Darnley’s View could benefit from a bit more juniper.

With its clean and light finish and sweet overtones, this is a great mixing gin, particularly in cocktails that use fruit juices in the mix. A martini wouldn’t be out of line, either.

On the whole, this is a solid workhorse of a gin, one that has just a little bit of uniqueness to keep things interesting and alive.