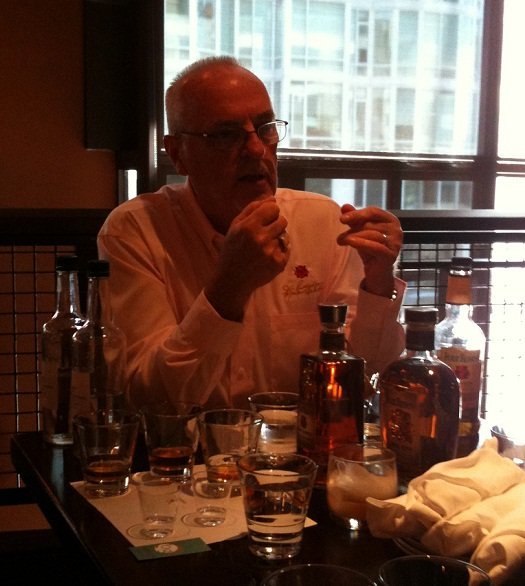 Having reviewed nearly a dozen different expressions of Four Roses bourbon, I’m well familiar with its famed “10 recipes” claims… but I’ve never really stopped to think about what that really means. Why would you need 10 recipes of your whiskey?

Jim Rutledge, Master Distiller at Four Roses for 40 years, stopped by San Francisco recently and, well, explained it all.

First, a little history. Four Roses as a brand dates back to 1888, and after the repeal of Prohibition it was the #1 selling bourbon in the country. Things went south after Seagram bought the brand. Way south: The company turned Four Roses into a blended whiskey, and a rotgut one at that. For decades the brand wallowed in obscurity, selling honest, high-quality bourbon overseas only, until Four Roses was finally relaunched in 2001 as the premium Kentucky Bourbon it once was. Now the company is doing some of the best and most consistent work in the bourbon world, and it was a pleasure to hear someone like Rutledge be so candid about how his product is made.

So, how does Four Roses get away with “10 recipes?” It works like this:

And that’s why various Four Roses bottlings taste so different from one another. Four Roses Single Barrel is made exclusively from OB mash with “V” yeast, and I find it to be a very hot bourbon, where that rye content really comes through. Four Roses Small Batch is made from half OE and half OB, with each of those fermented with “K” and “O” yeast. The result is a wildly different whiskey, with an amazing balance of sweet and spice and a lush finish.

One of the most instructive things I’ve encountered in my years of writing this blog is tasting Four Roses’ “white dog” new make spirit fermented with different yeasts. Rutledge produced samples of his OB mashbill straight off the still, one fermented with “V” yeast and one with “K.” The differences were astonishing. The OB/V was silky and smooth, not at all harsh like most white whiskeys tend to be. The OB/K was clean but with a racy spice character to it.

Now imagine what happens after these spend seven years wallowing about in oak barrels. Well, you don’t have to, I guess. You can just go out and buy them.