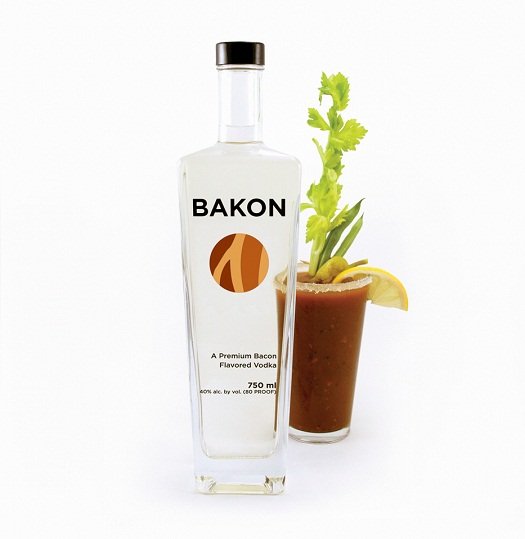 There are two schools of thought on Bakon — an honest-to-God bacon-flavored vodka — and never the twain shall meet.

One school says this is awesome, at a way to get that highly-prized bacon flavor into an alcoholic spirit.

The other school says it is disgusting.

I won’t be able to sway you either way, but I can give you some impressions at least.

First, do not try to drink Bakon straight. Distilled from potatoes in the U.S. and naturally flavored, the bacon essence here is much too powerful to be consumed this way. Intensely smoky and charcoal-like, it’s bitter and rough, ensuring that you have no hope of completing a single shot without substantial financial compensation.

Bakon realizes this, surely, and offers two standby recipes for the spirit. I tried them both. The first is a chocolate bacon martini, which I couldn’t get down despite loads of whipped cream and chocolate liqueur. The other is considerably better: Using Bakon in a Bloody Mary. Here, the bacon flavor doesn’t become so overpowering, and it manages to complement the tomato juice and spices fairly well. It’s more subtle, but comes across pretty clearly in the aftertaste — if you really love bacon, I have to say this is a winner.

That said, hanging on to Bakon just for the occasional Bloody Mary may not be worth the expense and shelf space. But, like I said, it’s a decision that I’ll never be able to make for you.

What Does a $20 Bloody Mary Look Like?
Posted in Buy It Now, Flavored Vodka, Rated B, Reviews, Vodka