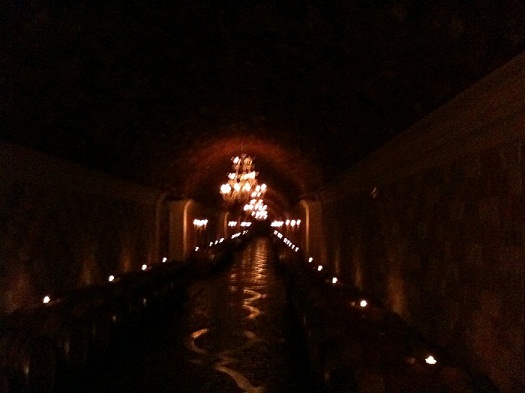 Do you want to taste some seriously “lights out*” wines? Look no further than Del Dotto, a postmodern institution along Napa’s main wine trail, and the proprietor of a tour I’ve been hearing about for years as a “must experience” event.

This weekend I finally summoned up the courage and paid the whopping $50 to take the hour-long tour into Del Dotto’s wine caves — really more like a walk down a long hallway, I guess — and the experience will not soon be forgotten.

No, not because of the wines, which are invariably over-oaked and incredibly intense and heavy with alcohol, the blatant house style here — although some are quite good.

No, it’s the winery that you won’t soon forget. Overdone with frescoes, columns, balustrades, cornices, and other forms of overdone architecture not often seen in modern America, Del Dotto is a gaudy throwback to a time that has never actually existed. And lest Del Dotto’s faux-talian inspiration not prove readily apparent upon entry, the soaring — pumpingly loud, really — vocals of Andrea Bocelli, piped into the tasting room and the caves via a dozen amplifiers, are ominpresent and impossible to ignore.

The winery’s guides are earnest and try their best to be heard over the tenor’s crooning, and they really do seem to believe the patter they are selling — that using heavily toasted oak and spending nearly two years in a barrel is the right way to treat a wine, no matter what varietal it is, and sure enough, the winery has its fans. It only sells direct, never appearing at retail.

Along the tour, all wines are tasted straight from the barrel, and the guides are generous. Thoughts on everything we sampled follow.

2008 Del Dotto Sangiovese Napa Valley / $49 / A- / velvety, with herbal notes, unlike Italian sangiovese in any way

2008 Del Dotto Estate Merlot Rutherford / $58 / A- / a return to form for merlot, lots of cocoa and blueberry notes

* A phrase of uncertain origin but meaning “great” which we picked up during our tour here. 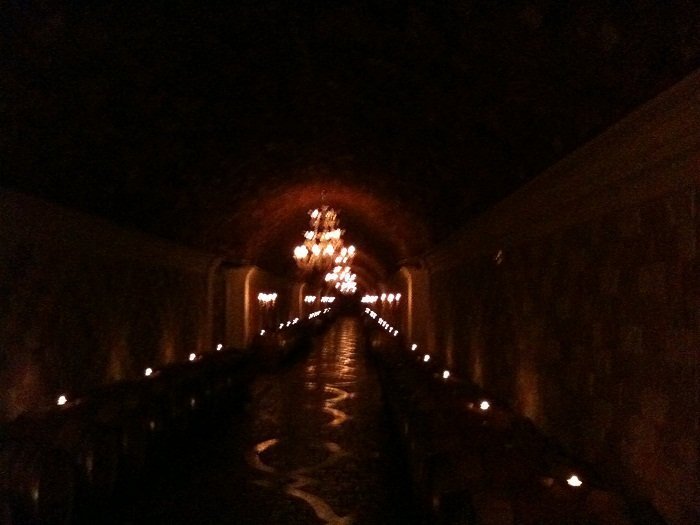