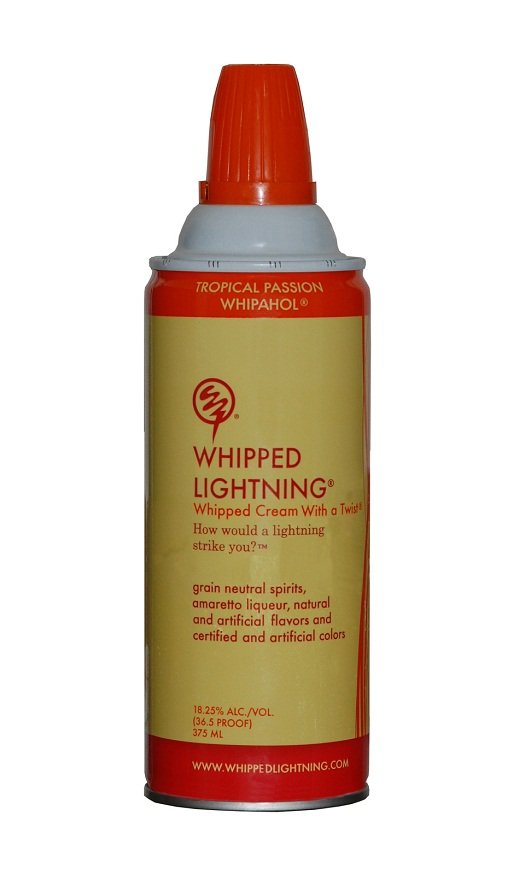 Sadly we don’t have a category for this: Alcohol-infused, flavored whipped cream.

That crazy conjecture is what Whipahol’s Whipped Lightning is: Flavored cream (and it is cream, not non-dairy topping), injected with alcohol and compressed air to fluff it up. It’s available in nine flavors, none of which are “whipped cream.”

That’s because you need flavoring to cover up the heavy, heavy alcohol character here. 36.5 proof doesn’t sound like much, but for some reason in whipped form it’s overbearing. Dip a tiny tip of a spoon into Whipped Lightning to taste it and you’re likely to grimace from the Sterno-like alcoholic burn.

The idea of course is that you spray this stuff atop your Bailey’s or chocolate-flavored novelty shot (or, who knows, take it to the beach for co-ed betting purposes), making the drink’s presentation all the better while spiking the alcohol content further. Ultimately it’s more for show than for anything it adds to the flavor of a cocktail.

Mileage varies considerably for each flavor. Of the six versions I tried, Spiced Vanilla was the easiest to handle, while Tropical Passion was my least favorite of the bunch. To be sure, all the varieties are relatively muted when it comes to the flavors printed on the canister. In all forms, alcohol is the primary characteristic, and any secondary flavoring agent takes a backseat. A chemical aftertaste is common, which I suspect is due mainly to both the alcohol and the propellant.

I’m not giving this one a rating; the idea is too brain-addling to even fathom one. And yet, if you’re really out-there with your mixology and abuse to your liver (refrigeration is not required nor even recommended), why not keep a can on hand. You know, for kicks?