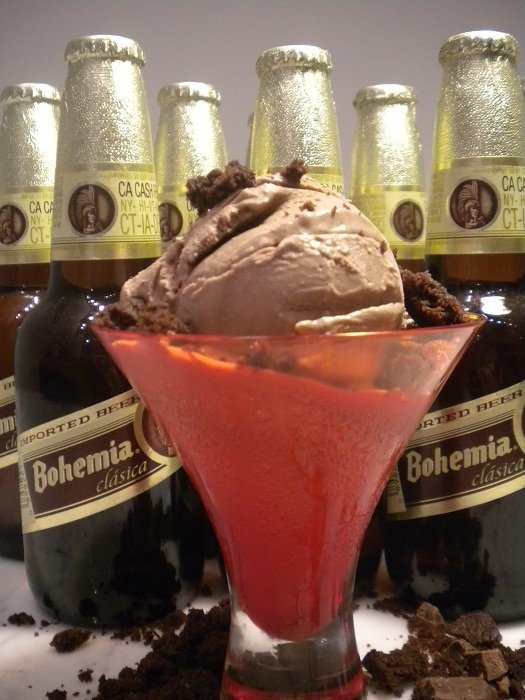 I’m not one to spend hours making ice cream at home, but God this recipe from Mexican beer outfit Bohemia sounds good.

1. In a small skillet heated over medium, toast the chile, pressing it flat against the skillet with a metal spatula until it is very aromatic—about 10 seconds per side. Place in a small saucepan and add the half-and-half, Mexican chocolate and the semi-sweet chocolate; heat over medium until steaming (but not boiling). Remove from heat. Cover and let steep for 10 minutes, then pour into a blender jar and process until the chile is completely pureed.

2. Set up a 4-quart saucepan, filled halfway with water, into which you can nestle a 3-quart stainless steel bowl. Bring the pot of water to a boil over high heat while you’re preparing the custard base. Reduce the temperature under the pot of boiling water to maintain a gentle simmer.

3. In the 3-quart stainless steel bowl, whisk together the egg yolks and sugar until thoroughly combined, then whisk in the chile-infused chocolate mixture. Set the bowl of custard base over the simmering water and whisk frequently, scraping down the sides of the bowl regularly with a rubber spatula, until the mixture thickens noticeably, about 5 minutes. The custard is sufficiently cooked when it reaches 180 degrees on an instant-read thermometer. (You can also test it by dipping a wooden spoon into the custard, then running your finger through the custard: if the line holds clearly, the custard has thickened sufficiently.) For the finest texture, strain the mixture through a fine sieve into a clean bowl.

4. Fill a large bowl halfway with ice. Nestle the bowl of strained custard in the ice bath. Whisk the mixture until it is completely cool. Refrigerate if not using immediately.

5. Stir the heavy cream, vanilla and Bohemia into the base. Freeze in an ice cream freezer according to the manufacturer’s directions. Scrape into a freezer container and freeze for several hours to firm.