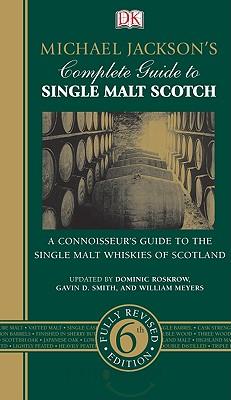 There are two major schools of thoughts in whiskey review compendiums: You can get Jim Murray’s Whiskey Bible, which features digest reviews of every whiskey known to man in birdseed type, or you can go for Michael Jackson’s less thorough (and covering single malt Scotch only) Complete Guide to Single Malt Scotch, which features quite short reviews but offers lots of history on malt whisky and a treatise on each distillery in the tome.

Both are worthy books and I refer to them frequently when I encounter rarities in the field.

Despite having died three years ago, Jackson’s book has been updated to a sixth edition, with Dominic Roskrow, Gavin D. Smith, and William C. Meyers contributing new reviews and updating coverage from the 2004-published fifth edition.

The book is of course long overdue, as the last six years have seen plenty of new whiskeys hit the market.

Fans of older editions of the book will find no surprises in store here. The writeups are exactly as they used to be (and there’s no way of knowing who wrote what), and Jackson et al do a good job of covering the basics without trying to convince you that a whiskey is awesome a la Murray. When reading Whiskey Bible, I always feel like I’m trying to be sold something. While Jackson’s ratings can feel a bit random with some wild variations in them, they are always allowed to stand without a lot of fluffy commentary.

Certainly a must-have tome for any serious whisky aficionado.