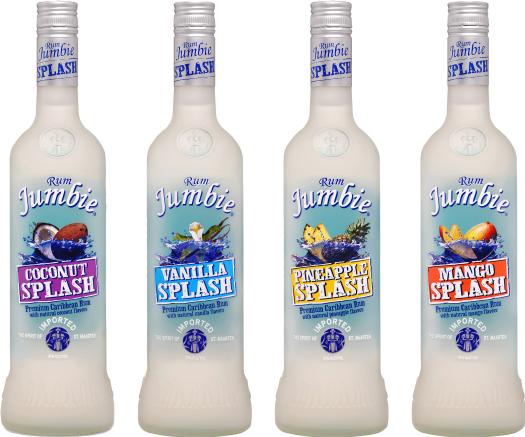 Rum Jumbie (the name refers to spirits allegedly trapped inside the caves of the Caribbean who would possess the souls of rum drinkers) makes several light, flavored rums plus a rum liqueur.

The flavored rums are all uncolored, are sourced from Panama, and are bottled at a scant 48 proof. Flavors are natural but otherwise unspecified.

Here’s how they stack up.

Rum Jumbie Mango Splash has a delicate mango nose and moderate tropical flavor. A little bite on the finish, but a fine ingredient in a tropical cocktail if you like a rum with a very mild and light body. B+ / $16 [BUY IT NOW FROM DRIZLY]

Rum Jumbie Pineapple Splash captures the aroma of fresh pineapple, but the flavor is off. Pineapple notes are pushed aside by out-of-place cocoa and vanilla character, with a sort of woody finish. B- / $16 [BUY IT NOW FROM DRIZLY]

Rum Jumbie Coconut Splash is extremely sweet, with sugariness that drowns out a lot of the coconut character. As with the other Jumbies, it’s heavy on the nose with the prescribed fruit (coconut is a fruit, right?), but the body doesn’t totally pan out. (Try Brinley.) B / $16 [BUY IT NOW FROM DRIZLY]

Rum Jumbie Vanilla Splash has almost no vanilla aroma and what little vanilla flavor there tastes synthetic. Fortunately it’s so light it doesn’t really taste like much of anything. Not a fan. C / $16 [BUY IT NOW FROM DRIZLY]

Rum Jumbie Liqueur is a 60 proof concoction of “aged rum and tropical fruit flavors,” and it’s already awesome from the start because of the bottle shaped like a guy playing a bongo drum and wearing a straw hat that serves as the cap. The amber nectar inside however is not quite as cool. It’s got cola and orange notes, apples, and loads of cinnamon and other exotic spices… but it doesn’t really come together. Perhaps it’s the loads of sugar in the blend that makes this hard to put down more than a few sips of. Perhaps it could make an interesting cocktail ingredient… but how? It’s simply too muddy and sweet and leaves a varnish-like coating on your palate that I wanted to scrub off. C / $30 [BUY IT NOW FROM DRIZLY]